So, I was supposed to attend Bauma Munich 2016 in April. You know how Bauma Munich took up so many hotels and apartments in Munich? Well, you better book your hotels early. I booked mine very early, and you know what? They canceled six days before my departure to Bauma. You know what’s even more annoying? The hotel rates all went up sky high; if only I had known Airbnb was going to cancel, I could have saved so much on my hotel fees to go to Munich. But due to this incompetent Airbnb host and staff, my booking got canceled and I had to pay extra to book a hotel at the last minute. One more thing: one of the staff at Airbnb chose not to help me because I was assigned to another person to help out already. So, after wasting your money to call Airbnb, they refuse to help you because you were in contact with a different person before. 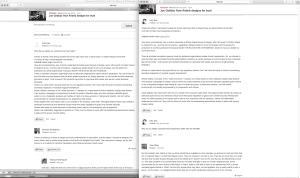 Airbnb has censored my story! This doesn’t surprise me considering they scrubbed the statistics of their recent court ordered data hand over in NYC. They delete my comments off of a TedTalk about trust ! I was an AirbnBeliever before – now I’m just terrified by the agentic protocol and the sociopathic response of my former classmates at Rhode Island School Design : Joe Gebbia and Brian Chesky. They are unscrupulous to allow my abusive host to continue using Airbnb 1. After he solicited me for extra money off the platform! & discriminated against my handicaps!! 2. Because Chesky is a Jew and it is disgustingly hypocritical to fund and protect a notorious Holocaust denier and leader of the KKK!!! visit the updated http://www.haughtee.com/airkkk for more . . .

We have the right to know who we are funding when we stay at a host’s home. I almost funded the right hand man of the ex Grand Wizard of the KKK. Read the True Horror Story here: http://www.haughtee.com/airkkk

We are SOOO disappointed with the accommodation that we booked in July 2015 in Amsterdam! It started out OK…

Upon arriving, the representative let us into the apartment, showed us through, provided some maps and information to the area etc. During his explanation of the apartment to us, he casually mentions that the apartment has a distinct smell as it was only days before, sprayed with poison/chemicals for routine pest control. At the time, we didn’t think anything of it. We left to get some dinner, returned, showered etc and prepared for bed. The next morning we woke with varying degrees of headaches, nausea, dizziness and near-vomiting. The smell was unbearable. (It was also quite rainy so no windows could be opened to air the place out.) We called the representative EARLY that morning (approx 7am) and informed him of what had happened and that other arrangements would need to be made. We let him know that we had activities planned for the day, but he said that ‘someone would be in touch’ to let us know of what to do from there. By 4pm that afternoon, we had not heard from him, the owner of the apartment OR Airbnb. We left and checked into a hotel. We did not hear from anyone for the remainder of our time in Amsterdam. We began the process (online) to claim a refund. We were surprised to learn that approximately only one night’s worth of accommodation was refunded and we were still out of pocket for the rest of the nights! (approx $AUD1700!)

The first issue is this – THEIR website states: Accommodations on the Airbnb platform should meet minimum quality standards regarding safety, access, and cleanliness, and they should be consistent with the description provided by the host. I’d like to know how an apartment, sprayed with toxic chemicals, is in any way SAFE?! We had two small children aged only 4 and 6 at the time, we were the most affected by this. On these grounds alone we should have qualified for a FULL refund. The apartment should have NOT been available at that time – to let the chemicals air/disappear. Airbnb DID NOT inform us of this prior to our check-in and should have. Had we known, we would not have stayed there. So I have to assume then that maybe they knew this, and that’s why this wasn’t disclosed? (can anyone say ‘fraud’). So they took our money anyway, knowing that the apartment was less than acceptable.

Second issue is this (again from their website): For a full refund, cancellation must be made a full 24 hours prior to listing’s local check in time (or 3:00 PM if not specified) on the day of check in. For example, if check-in is on Friday, cancel by Thursday of that week before check in time. or If the guest cancels less than 24 hours before check-in, the first night is non-refundable. or If the guest arrives and decides to leave early, the nights not spent 24 hours after the official cancellation are 100% refunded. Clearly, we fit into the third category. We did check in, we did leave early. So the nights not spent after the official cancellation are 100% refunded!! (or should be…)

I have called the Australian number (only to be diverted to some Phillipino call centre) where the staff are clearly only trained to answer with very scripted answers. My details are ‘passed on to case managers’ who DON’T call back even though I have asked for TWO calls now, but instead reply with emails that state: Thanks so much for your patience throughout this process. We appreciate the time you’ve taken to share your concerns with our team. However, we have issued our final decision for this case and we will disengage from further discussion on this topic. Really?! They’re “disengaging” from this topic?? The customer, ME, does NOT accept the matter closed! Their OWN policy tells me I’m entitled to a refund! What is the point of a policy if you do not stick to it?! It isn’t worth anything. Given the seriousness of our complaint – the POISON you expected us to live in – they STILL have not addressed this issue and they continue to say that they’re decision is final. Again, I do not consider this matter closed and I will be informing the relevant authorities here in Australia that I can and any and all social media platforms!

Save your money and just book with hotels! Zero stars for you Airbnb Fraudsters!

Just finished reviewing a host yesterday after our stay in LasVegas( Henderson area), there are 3 parts to the review,

part 1) what you liked most about your stay

part 3) what improvements can the host make to raise your satisfaction.

All of the last two (negative) parts get deleted from the review and only what you LIKED gets shown on the Airbnb website, leaving dangerous, critical faults hidden from the future guests.  Airbnb says they pride themselves for transparency and free speech, so it is ironic that they dismiss the very motto they preach. Every false accusation and statement from the host gets to be shown though, and then when you write to Airbnb asking them to delete or edit to be fair, they say it does not violate their review policy and is the ‘perceived personal experience of the host’ although you have written communication proving of its falsehood.

The host can also change their cancellation and extra fee policy after the booking from easy to strict forcing you to loose most to all of your money or just stay even though you want to cancel! The pictures can include pools and other amenities even though they don’t disclose the closure and/or not having access to fitness room. This is fraudulent business and unethical. I will never book from this site again and will tell all my friends to never do so either.

Rented a place through Airbnb, the first night didn’t get a key. The second night was locked outside, and so-called “host” said that I should have texted/called before [showing up at the place I had paid money for]. After asking why can’t I get a key, the host became hostile and suggested to cancel reservation. I contacted Airbnb, cancelled, got full refund (thanks to Judy W. with Airbnb), and got offered a hotel room for free due to the inconvenience that was brought upon me from this psychopath, ungrateful, imbecile “host”. I hope nobody ever stays at Martha’s place in east Austin, and I hope Airbnb gets her place off the list.

How would you like to stay at a home of a major codependent lady host. This host in hawaii was so mentally unstable it was scary for me. She will say things so rude then immediately pull back with something like “i don’t mean it that way or this way”. Ridiculous! Host was always yelling at her child and husband. I also loved all the post notes that were all over my room and bathroom. The notes were reminders to turn off the lights, fan, don’t drop quilt onto the floor, fix your bed, be quiet, and keep door open.  One day before checking out, host asked me to leave because I wasn’t respecting her rules. This rule that I broke was coming quietly home at 11PM. A crazy host in hawaii. nightmare!

Airbnb guests need to be cautioned about a host in Honolulu with a listing called “surfers room”.  This women is a psychopath.  She will leave small notes everywhere to remind you about the rules of the house.  When she talks she is screaming.  She is always screaming at her daughter that doesn’t go to school.  She sounds very nice before arrival, but afterwards she is a crazy woman.  Be very careful with this host.  If you like a woman who is always screaming and complaining, then you might enjoy the circus. I  am fighting for a refund right now.  Customer service apologized and told me they would file a complaint.  Stay away from the “surfer room”‘.

I’m not a Guest. I’m not a Host. I’m a LANDLORD. And yesterday I received a call from one tenant at a duplex that the other tenants suddenly have a lot of guests in the past month. And the latest guest has been there all week while the tenants are GONE! Turns out that couple has been subleting out my property thru Airbnb. Their 31 reviews in the six weeks average almost 5 starts because the property is so nice! The couple is now being evicted and I pity those who have booked thru September because Airbnb doesn’t think they should refund you. LOL The story is way complicated but pay attention -AIRBNB DOES NO CHECKING ON HOSTS OR GUESTS SO IF YOU ARE STUPID ENOUGH TO USE THEM YOU GET WHAT YOU DESERVE.