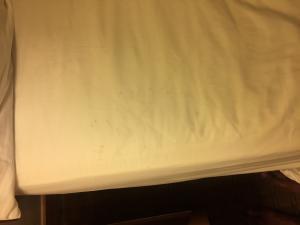 I had a terrible experience with my stay. We saw condiments and a drink left in the fridge and thought nothing of it. I saw two ants in the room upon arrival and thought it wouldn’t be a problem. We had left to explore the city of San Juan and then arrived back to the Airbnb at night and went to sleep. In the morning, the hotel room had ants all over the bed and night stand. We woke up in the morning with ants all over us. Then we knew something was up when there was mold on the shower curtain, the bed sheets had stains and someone had left their bathing suit on the balcony.

We were about to leave the hotel room in the morning and a man was trying to enter the room saying that he was housekeeping, even though he didn’t have any cleaning supplies. The area of old San Juan has not recovered at all. We hardly saw any guests or people in the area. The closest beach was closed due to the Hilton Caribe reconstruction. The nightlife in old San Juan is a 40-minute walk so nothing is really walkable distance like the post had said. I explained my situation to the host and the host immediately became aggressive. Then resorted to name calling. They called me a millennial. I thought it was pretty funny at first but it was pretty rude.