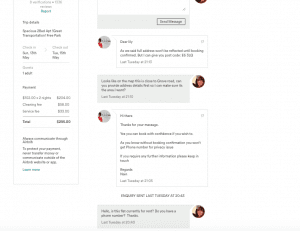 I would like to report that my husband and I were just victims of an elaborate property fraud here in London by a long con Airbnb scammer. We lost our entire apartment deposit and what we thought to be our lovely new London flat we had been working for months to save money for and were preparing to move into this Monday, April 30th. I really want to make other consumers and families looking for new apartments aware of the potential dangers and get our story published to raise consumer awareness. It’s shocking what happened; I’ve never heard of such a thing.

As far as I can gather from police and what has happened so far, the situation is as follows. We saw a property advertised on Gumtree in our zone in London when we were looking for a new flat to rent for this year. We contacted the advertised “landlord” via phone to chat and set up a time to view the property for rent. We went the next evening in person to see the apartment after work for a walk through viewing. All seemed normal: there was a man who met us, and showed other couples through after us. Nothing seemed off. We even went back a second time for a second viewing.

We spoke to the “landlord” a few more times. He created a tenancy agreement. I had him amend several clauses on the rental agreement before we all signed the final agreed tenancy agreement. We sent over the bank transfer deposit for the property. We received an emailed receipt. We were told he would contact us a few days before the move in date to hand over keys and do a final walk through.

All seemed fine and normal until this week when my husband was unable to reach the landlord all week. Getting concerned, we walked to the flat – it’s in our local zone – to knock on the front door. A couple answered and said they were staying there until today, Saturday, April 28th, renting it via Airbnb. They told us the name that they had been given for the “host” who rented it to them, which was a different name than what we had been given as the landlord’s name for the property, the person who had showed us physically inside of the flat, drawn up our tenancy agreement, and taken our deposit.

We went home and found the property advertised on Airbnb by the host’s name (name now changed in Airbnb, I noticed) the couple had given us. I logged into my current Airbnb account in order to chat with the “host.” At first I thought maybe everything was still okay, and that the landlord would still contact us as I saw the flat was marked as not for rent at all after Saturday except for three days in May (which was odd, because we were supposed to be moving in Monday, April 30th).

I was hoping it was an error on the part of whoever was temporarily renting it out on behalf of the landlord on Airbnb. The host’s bio on Airbnb said he was a professional property manager. I saw 22 other listings, so I thought maybe it was a company. Wanting to investigate further, I asked if the property was still for rent. The host said it was, and told me to go ahead and book the dates in May. I asked for his phone number; he refused unless I confirmed the booking. I then asked for address confirmation, and the “host” gave me another post code, which was for another address, so that all seemed immediately alarming and suspicious given we were supposed to move in this upcoming Monday.

We phoned our bank immediately, and sure enough, the bank details we had been given weren’t even for the same bank name. Our hearts sank. We reported the fraud to the bank and started preparing for the next preventative steps. I decided to return the next evening after work to the flat. We again knocked on the front door of the apartment. The current Airbnb guests said they had called their host who agreed to let us have his phone number.

We called the host and he said he was a manager from a property management company called Prime Estate Agents, and his company had been managing the property for years. He claimed that one of his tenants at the property had conducted the scam, and had also taken deposits from other couples as well. He said although he was willing to cooperate with the police, he would give me no further information. However, I was welcome to visit his realty office.

When I went to see him yesterday, he was extremely evasive, would not answer questions about why he gave me a different property address and name when I had chatted with him via Airbnb. All he said was that there were multiple other victims in the scam, and that my lease was not valid even though the landlord’s name listed on the lease agreement was the correct one. He claimed anyone could find out this information via land registry. He would give me no details about who it was that had the keys from the rental agency on that night/stayed there via Airbnb booking, just said it was one of their tenants, and that they would not give any more information unless it was to the police.

Airbnb has not helped me at all, the property company says its not their responsibility, our bank says we cannot get money back unless the criminal’s account still has money in it, and now we have no flat to move into. The police said they may or may not investigate, and we are left with no deposit or flat, and no one that will help us. This has been a heart wrenching experience, and I hope by sharing this that maybe others can avoid such potential scams. We have been living in London less than a year and worked saving money for this flat, and are left speechless after this. Also, I believe this professional property company is breaking council and tax laws by renting full houses out not properly zoned for extended periods of time.