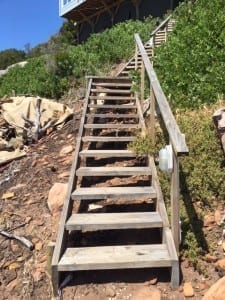 Booked a house in Fish Hoek, Cape Town from one Sonny Naidoo. In his listing he claimed the property had 2 bedrooms and a steep flight of stairs. The picture in his listing was of a flight of stairs that looked fine – however when I got to the address I found that the picture was taken in front of another property all together. The actual house had multiple flights of steep stairs to climb in order to reach it. Upon the climb I found that the house actually didn’t have a second bedroom, only a sort of pseudo loft in the kitchen accessible only by climbing a ladder. No safety gate of any sort on the platform either, making it very unsafe for children (listing claimed to be child friendly) AIRBNB support told me the following: “I’ve reviewed the video Joel and while I understand that the staircase shown was not the same as the one you actually climb to the listing but the whole point of the picture was to show the view. It was stated in the description that there was a steep climb and that you would need to be able bodied but that is why porters were supplied. At this point as the description covered the basis of the fact there was a steep climb I would be unable to process a refund for the reservation besides what I have already given.” So – it seems a host can post a picture of another property – inferring that it is the actual property, and airbnb doesn’t care. A host can claim 2 bedrooms, while not describing it accurately, and AIRBNB doesn’t care. I’ve attached a screenshot taken from the listing, showing the staircase from a different property – a clear misdirection – then the actual listing and pictures of the ACTUAL climb property taken by myself.