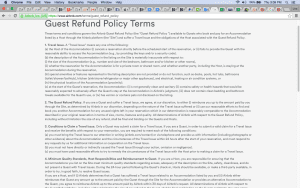 I had a guest who first said she was “uncomfortable”, then changed it to she “feared for her personal safety”.”She ended up saying she was about to have a panic attack and said she ran out of my house because she was “afraid for her personal safety”. She also said the last host who she told that she was “uncomfortable” just handed her money for a refund, and she wanted me to hand her cash, which I did not even have yet. These days if you’re lucky they pay on time, which means 24 hours after the guest checks in. Then I had to deal with an Airbnb “arbitrator” named Kevin T who did not seem to know what “Guest Refund Policy” was and kept dismissing what I was saying, and only listened to her side without giving me a chance to defend myself. In the end, he circumvented my cancellation policy, and yanked nearly $1500 from me. He told me on a recorded phone call that he would pay me for 3 days and paid me for less than 1. Now, the case is closed. I love the way they do something unconscionable and then say the case is closed. Oh yeah, their legal team was supposed to contact my lawyer but never did. No way to contact their legal team. I am thinking of contacting the American Arbitration Association. I wonder if Airbnb will ban me if I do that. I guess transparency and honesty will go out the window at that point.