I am not sure who to reach out regarding my recent Airbnb stay in Anaheim. I am conflicted between leaving a negative review for my host or contacting Airbnb. Christine was responsive and genuinely a nice person when I meet her but the place that she hosted was not sanitary. She met with me and gave a quick tour of the studio. Upon entering, the studio had a pungent smell – hence the multiple candles and air fresheners in the room. The place looked clean but upon settling in, we found the bed was covered in white dog hair. We know it was dog hair because she drove away with her boyfriend and a small white dog. Luckily, my fiancé and I are not allergic to dogs. We found dog hair on top of the comforter and inside the bed under the sheets. We thought a quick fluff would do the trick but the bed was disgusting. As we removed the bed sheets, the mattress was yellow and brown and had nail polish on it. We found a fake purple press-on nail. The towels provided were gross. She said they were clean but they left purple lint on us as we dried off. The other towel was folded nicely on the counter; we turned it over to find crusted white stuff throughout the towel. We had to use our shirts to dry off. We checked in at midnight so we couldn’t find another place on short notice. Instead, we placed pillows on the floor to sleep. The next day, we ended up crashing at a friend’s house. I do not want to leave a negative review for the host, as she was super nice, but the place she listed was not Airbnb quality. 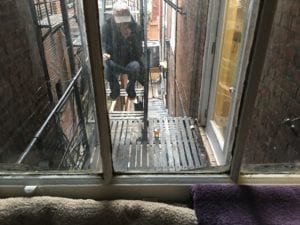 I recently stayed at an Airbnb in Philadelphia. It was so disgusting: black mold in the shower and urine stains on the sofa. The window to the fire escape did not lock. I had my family with me. It was New Year’s Eve weekend. We bravely stayed for one evening. I thought I would wake up with bed bugs. I contacted the host the day we arrived multiple times. He was very responsive. I contacted him again in the morning asking for a refund because his place was just so filthy and unsafe. He said he’d refund me. He’s not so responsive anymore. Two weeks later, and I’m still waiting. Airbnb customer service said to read over the cancellation policy. I guess they don’t care what type of accommodations their hosts offer. I will never, ever, use Airbnb again. Unbelievable.

To whom it may concern: this location, though convenient to LAX, was the worst Airbnb property at which I have ever stayed. I have stayed in eight other Airbnb locations this year, and all have received good reviews. I normally don’t leave bad reviews, but the public needs to be warned. This place is that bad. The first thing that hits you is the smell when you walk in. Being that is a very old and dirty apartment, it’s not surprising there is mold growing everywhere and an unidentified slime coming out of the wall. The carpet is filthy, there is miscellaneous junk sitting along the edges of the wall in different rooms, and when you start looking around you begin to notice all the places the walls have been patched. The ceilings of both bathrooms and inside the cabinet over the kitchen sink have mold growing, literally hanging down like moss on a tree in the rainforest. The handles on the refrigerator have been ripped off and are on top of the refrigerator along with 1/4 inch of filth.

The cabinet above the kitchen sink is like something out of a horror movie. In the cabinet above the stove is more filth and a sticky trap with a dead cockroach and cricket. The ceiling in the top of the cabinet looks to have been finished by a drunk auto-body man who got a volume discount on Bondo. In the cabinet under the counter top stove are 220V wires just wire nutted together. This place has so many health and safety violations it should be condemned. The three bedrooms were sparsely furnished with cheap $5 pictures from Walmart but the worst part is the linens. For the room in which I slept (rather fitfully), the queen size bed had a king size fitted sheet, no top sheet, and a comforter that appeared threadbare and very old. The room at the front of the house was so bad that the person assigned to sleep in that room opted to sleep on the couch. All the vertical blinds had missing slats and did not allow for privacy from the neighbors. If we had not gotten into town so late we would have gone somewhere else. I think the part that makes me so angry is that I was charged and I am assuming previous occupants were also charged a cleaning fee. I have to believe that all the recent reviews that say the place is clean are fake. Unless you are okay living in filth do not book this dive.

We booked a stay at a small, basic apartment in Sitges. We weren’t expecting anything flash, but certainly clean. It looked nice in the photos. We didn’t arrive until 00:30 and were greeted by our host’s daughter, as he was away. She gave us the key and left, so we went in. We found hairs in the bed and stains on the sheets. The bathroom was filthy and stank of urine. The sink was dirty and had hairs in it. The shower was gross and dirty. The toilet had stains down it and urine on the seat. The kitchen had food debris on the floor. The fridge was gross, mouldy, dirty and had hair in it. The whole place was disgusting. We spent the night sitting on the sofa searching for alternative accommodation as there was no way we could stay there. Once we had secured somewhere else the next day, I messaged the host to tell him. He was defensive and did not respond very nicely. We took photos and sent them to Airbnb. Thankfully we got a full refund, so we had no complaints about them. This host should not be letting out this property in such a disgusting state. There’s no excuse for cleanliness. It’s such a shame we can’t leave a review on Airbnb to warn others.