The owner of this rental property, Jason McLean, purchased the Airbnb property Villa Viva with money owed to women he raped as children in Minneapolis. A simple Google search will show you numerous articles detailing his crimes, legal proceedings, and his ultimate flight to Cabo San Lucas Mexico to avoid the consequences of his sexual assaults of children… and he wants you to be a guest in his home.

Do not support this criminal with your business. Keep away, especially if you are a young woman or have children. This is not hyperbole. It is well documented in the U.S. news, lawsuits and courts, that McLean preyed upon and sexually assaulted at least six minor child actors and students at the Minneapolis Children’s Theater where he was a company actor and teacher. Two of his victims have obtained civil judgements against him in the US, yet he profits off of this property in Mexico.

He does not deserve your business. McLean has returned to the US and is opening a restaurant called Small Wonder in Oakland, California. Beware. The man is a child rapist.

I had to call the police because a nutcase Airbnb host in London wanted cash if I wanted to stay longer than planned (I had paid for three days or so). She demanded that the cash be pushed under the door of her room. I found that bizarre. My nieces and I decided not to prolong our stay. She refused to return our luggage. I had to call the police. Airbnb put us in a hotel but didn’t care about the fact that I had to call the police so other guests were probably exposed to that woman. This situation shows that: 1) Don’t trust Airbnb to care about criminals 2) Don’t pay for your whole stay online. If your host is a lunatic you may have trouble getting your money back. By the way, Airbnb didn’t ban the host. They banned me.

My first and last experience with Airbnb pointed out a fundamental flaw in their business model: hotel, motel and even most B&B operators are professionals; Airbnb hosts are amateurs. Because of that, they may not understand they are in the hospitality business, and Airbnb guests can be the unfortunate guinea pigs. As soon as our family arrived at our condo, our host came around and seemed to be spying on us. That evening she chased down a group of us out for a stroll; she asked them how many were staying at the condo told them she suspected more were staying there than she permitted. Later that night she pounded on the door and loudly proclaimed the same accusation. We explained that we had only six staying there (the two-bedroom unit was advertised to sleep six) and two people visiting who were staying elsewhere. She demanded we leave. When we refused, she picked up her phone and dialed 911, claiming she was the victim of assault! When asked if she had been physically assaulted, she replied “no, but I have been verbally assaulted.” When that apparently didn’t impress the operator, she claimed she had “nine drunk tenants and I want them out.”

We told her if she wanted in the unit she would need a warrant. Eventually the police arrived, and she demanded through texting that we come out and meet with the officer. When we didn’t respond, she called Airbnb. To my shock, Airbnb texted me that they had a serious complaint against me and that they had cancelled the reservation and ruled that a refund was not permitted! The next morning, this obviously emotionally unstable host opened the front door and pounded on the wall, shouting: “Your reservation has been cancelled and you need to leave!” We knew she had no legal right to evict us, so we stayed; however, the stress ruined our vacation. And the fact that Airbnb supported her madness only added to the nightmare. Beware of Airbnb… you will be subject to the whims of your host and the company will not have your back! 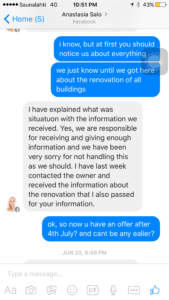 In early June 2016 we chose a apartment in Helsinki for three months and I decided to rent in the Hagaa Area (pictured). Normally, this would come to €130 but because it was a long term arrangement the host offered a discount of €100 and told me she couldn’t make this deal through Airbnb; I should pay cash at arrival. Usually apartments in this area rent at about €1,000 a month: they’re very old and under renovation. Some people even block the entrance; my kids had to leave by the emergency exit, which was surrounded by dangerous equipment and tools.

Anyway, I had to pay €3000 a month plus a €70 cleaning fee. When we arrived, the host told us the renovation had been finished and they would clean up the stairs soon. However, the next day we realized the real situation and complained. The host told us she didn’t know anything about it but cut off the electricity and water for many days following our arrival. When we checked out, she sent us a list of damages and quoted us €1,200 for a small kitchen table and €240 for a cleaning service… I had thoroughly cleaned the apartment before we left. Now she’s threatening to report us to the police and slandering us by saying that I committed a crime by damaging the kitchen table. Be careful from whom you choose to rent. You never know what will happen to you.

A year ago, my girlfriend got me a birthday gift: a trip to a Caribbean island! However, we had to cancel at the last minute due to our Airbnb host sending us crazy private messages before we got a chance to get to the place where we wanted to go. We filed an appeal with Airbnb to get the refund then the host went completely insane on us: death threats, stalking, criminal harassment. We filed a police report and they could not do anything of course… Airbnb sided with their host, would not let us post a review, suspended the account, and covered up their mess as best they could after we provided a copy of the police report as well as all the creepy and harassing messages and death threats. We have shared our story with over a hundred people and they were completely freaked out and said they would never support Airbnb for covering up criminal activity. They are a joke and it is only a matter of time before people start dying then they might consider a screening and application process for hosts…. but I doubt it…

Airbnb has some very serious due diligence problems. They obviously have grown too big, too fast and too greedy to properly vet Hosts who are illegally subletting, especially single family homes in R1 neighborhoods. Worse, airbandb seems only vaguely interested in correcting or taking down illegal listings, preferring to hide behind boilerplate excuses. The customer service reps are either total nincompoops or obviously trained to do as little as possible to fix problems. Calling 855 424 7262 is pointless, all you’ll get is a frustrating run-around. I am speaking from a very unpleasant experience where a tenant I am trying to evict for non payment listed with airbnb, even got their pro photos and a very exaggerated posting and is illegally sub-renting my property. At this writing it is reserved as a party house for New Years and airbandb has done nothing to help. Airbandb was a good idea now gone very wrong, more Hosts and Guests alike are going to be bitterly disappointed. But, the unaware property Owners are at greatest risk. Airbandb should check real estate title and contact Owners for permission and approval before accepting and posting renters who sublet. They don’t and this is bordering on criminal aiding and abetting. 855 424 7262 is useless BTW.