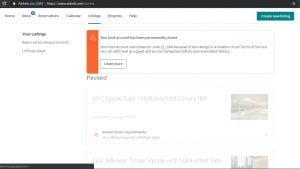 “In my experience communication with the host tends to be limited”

What do other hosts think about this? Would you allow someone into your house who doesn’t communicate? Even Airbnb encourages hosts to prepare a set of questions for guests, asking about their arrival time, reason for visiting, number of guests, luggage, house rules, etc. I literally copied and pasted the questions from Airbnb, but the guest used it against me, leaving one star for communication.

I moved to the freshly renovated luxury apartment a month before the guest’s arrival and asked him to take care of it like his own home. I mentioned I had a guest who painted her hair black in my brand new white bathroom – leaving black stains – and told the guest I’m not into drama which means if he doesn’t feel comfortable with my cleanliness he’s free to book other accommodations. I spend too much money on this apartment and couldn’t afford further damages in my first month. I’d rather him cancel and be open about it. I was sure I was  polite and professional with my communication; therefore I didn’t understand the guest’s aggression towards me and it really upset me.

“Upon arrival in the city, I reached out to the host to arrange a meet (something I’ve never had to do with any other host)”

Let me specify ‘the meet’ in the apartment. The correct word would be: meet and greet. What do you think, hosts? Is it bad thing to meet your guest in person? Even Airbnb commercials shows the meeting of the host and guest. Again, I didn’t understand what was my mistake.

“She provided me with a different address to the apartment”

My building has two entrances: the north and south side. You are allowed to put only one address on the listing. Therefore I always ask guests which side they’re coming from to give them a better address. I even send the map to the Airbnb team showing it was the same place. This was ignored.

“I think she could tell by my facial expression, I knew something was not accurate.”

Well, what a politically correct way to cover the fact he looked at me with disgust, assuming I’m Russian upon first meeting face to face. I felt horrible and very uncomfortable, but couldn’t name the feeling. I was thinking the guest thought I was from a third-world country and he was concern about the cleanliness. I reassured him everything was clean and showed multiple cleaning products and detergents. I encouraged him to feel free to use them during his stay whenever he wants.

He attacked me again, saying I asked him to clean. The apartment was sparkling clean; I put a lot of effort and heart in my new home. I’d never expect someone would want to clean it. Therefore I admit I left only one (thick) roll of paper towels alongside several different types of clothes, but I didn’t expect a guest would want to clean the entire apartment. I felt like he wanted to clean after me… clean out my presence. If he had asked about paper towels I’d simply have bought them, but he didn’t.

Finally, he complained about the “sparsely” furnished apartment. Before I moved in, I checked approximately 30 luxury apartments with a real estate agent. I took pictures of furnished model apartments, and I was collecting catalogs with recent home decor trends. My style would have been named ‘urban minimalistic’ by an agent, but not the guest, who used it as another occasion to attack me – suggesting I’m poor minded, maybe even retarded (as he mentioned in further conversation due to my origins) and couldn’t afford furniture. Obviously he didn’t expect I would know any trends; he prejudged me and my place. It was a disgusting experience, but that was just the beginning.