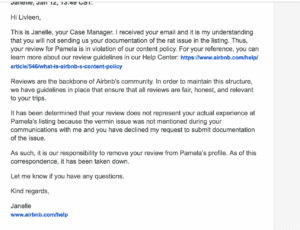 I moved out on January 5th from a three-month lease with Airbnb’s permission by letting them know that I wanted to move out. They said if the host decided to refund me for the days I didn’t stay I could get my money back. After I spoke to the host, she agreed and I moved out. Once I moved out, the host conveyed to Airbnb that it was a miscommunication and refused to pay me back for the days I didn’t stay there. During the course of this battle I never mentioned how bad my stay was so they even removed my review from the host’s page after threatening me for not having documentation. The house where I lived had a rat infestation and there were more people in the house than what was mentioned – all men who smoked. I was exposed a large amount of secondhand smoke as a result. I mentioned this in my review and stated why I hated the stay instead of mentioning about the lack of a refund. To this, the case manager who constantly harassed me finally took down my review even when I asked her to confirm the unsanitary rat infestation with the host. All this was when I only made a rough draft of review that wasn’t even posted. This makes me wonder to which how many people Airbnb is doing this. How many reviews are they censoring, tweaking, falsifying, and into how many unsanitary conditions are they letting the naive customers walk? There needs to be some sort of New York state regulation against this kind of behavior and unacceptable business model.