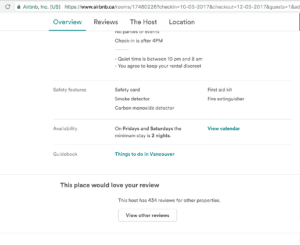 This is under “host stories” but I was actually an unwilling host. A woman named Richelle rented an apartment in Vancouver from me on a 12-month lease ostensibly for herself to live in, under an ordinary tenancy agreement. However, I soon discovered she had it listed on Airbnb (and Craigslist) as a “luxury apartment”, charging $125/night in low season, under a profile name, “Ragna” (in which she appears in disguise). The ‘house rules’ in the ad advise guests to be “discreet” about their stay. “Ragna” has some 434 reviews for other properties on Airbnb – all very likely owned by people who have no idea that strangers are staying in their property over and over again. Of course, trying to contact Airbnb to have the ad removed is like going down a rabbit hole. How it can be that Airbnb would allow someone to post ads for a property they do not own without proof that the actual owner has given permission is perplexing.