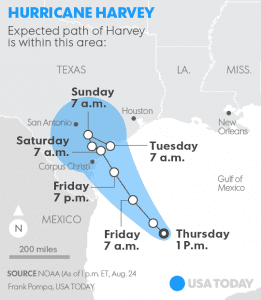 I’m supposed to go to Austin tomorrow for a work event but unfortunately my flight and several others have been canceled. I informed my host of this and she (after speaking with her husband) said that they won’t be refunding me my $600+ because they already paid for cleaning and lawn services and that I really need to ” understand where we are coming from.”

I’m sitting here trying to contact Airbnb which is a nightmare as many of you know. I talked to a woman who was obviously from a call center overseas and she was next to useless. I’m super pissed. I feel like this is a friggin’ fraud. I made every attempt to keep my reservation, but there is a literal hurricane barreling down on Texas and this woman has the nerve to say to me “I spoke with Airbnb and they said that since the severe weather isn’t in Austin itself then our original cancellation policy is still in effect, so unfortunately I can’t offer you a refund. ”

“In all, the storm could dump at least 15 trillion gallons of water on Texas, WeatherBell meteorologist Ryan Maue said. In addition to the Corpus Christi area, near where the storm should make landfall, Harvey ‘has the potential to cause very serious flooding in such highly populated, flood-prone regions as the Austin-San Antonio corridor and the Houston metro area,’ Weather Underground meteorologist Jeff Masters said. Harvey may be the strongest landfall in this area known as the Texas Coastal Bend since infamous Category 3 Hurricane Celia hammered the Corpus Christi area in August 1970 with wind gusts up to 161 mph, the Weather Channel said.”