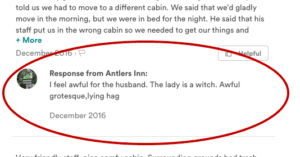 Antler’s Inn was by far the worst lodging experience with Airbnb we’ve ever had. After we’d already gone to bed for the evening, the manager of Antler’s Inn woke us up and told us we had to move to a different cabin. We said that we’d gladly move in the morning, but we were in bed for the night. He said that his staff put us in the wrong cabin so we needed to get our things and move to another cabin now. We scrambled to pack our things (a guy in a Hummer was screaming at us to hurry up). The cleaning crew came in and didn’t change the sheets for the bed we’d just been sleeping in; they just remade the bed.

When we checked in, the cabin was not in very good condition (stains on the furniture and Budweiser cans in the freezer), but I’m horrified that they don’t change the bedding between guests. In the manager’s office, we were pissed. We had checked in seven hours ago and they waited until we were in bed to let us know we needed to leave? The manager told us, “I’d rather you just get out. I can rent the cabin in a heartbeat for hundreds more than what you’re paying.” He was also upset that we had a dog, though we mentioned it when we requested our booking and got a confirmation for two adults and one pet. He kept trying to pressure us to just leave, but it was freezing cold and dark, the winding mountain roads were icy, and we’d each had wine with our dinner. We didn’t feel like it was safe to leave.

He gave us a key to a new cabin (oddly, he let us keep the key to the original cabin, which seemed really unsafe), but didn’t check on it ahead of time. There wasn’t even a pathway cleared and we both slipped and fell on the ice. We left in the morning, still furious with them for treating us like this. He said he wasn’t going to charge us for the stay and we civilly left it at that. Then surprise: we got a charge. Because we settled the dispute with Airbnb (they felt the charge was inappropriate and refunded us in full), we weren’t going to write a review. Antler’s Inn felt differently. They called me “a grotesque, lying hag.”