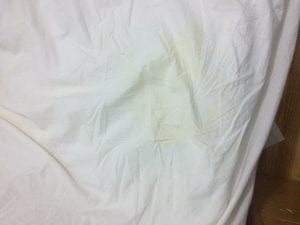 I had a five-night stay in a Brooklyn Airbnb, where my brother and I rented the entire home. After the first night, I called the host to express my dismay at the lack of cleanliness and got nowhere. If I had contacted Airbnb at that moment, none of the following would have happened; I would have gotten my money back, and all would be well. I didn’t know that was an option at the time. I tried to work with the host directly. I didn’t think I could have afforded to move to a hotel and I was worried about paying for two places and not getting my money back. I stayed and tried to make the best of it.

On the third day, the ceiling started to cave in from an upstairs plumbing issue and the pipes had backed up into the bathtub. The bathroom was completely unusable. I contacted the host, requested a refund and he refused. He literally said, “Why?”

Really? He said it was an old house and he would get it repaired. When I returned to the home that evening, the repairs had been made. I only had two more nights in that awful place and I figured I would make the best of it, really wanting to avoid any further hassle. The next day, we came back to the rental to find the host and another person inside. They had been there for quite a while, totally unauthorized. My suitcase had been packed and moved aside. The host was eating a meal on the patio and refused to leave even after I showed him my reservation. There was a huge fight. He said it was his house and he wasn’t leaving. I certainly wasn’t going to stay and hang out with him.

It was an unsafe and very volatile situation. I had no choice but to leave immediately before things got out of hand. I contacted Airbnb by phone from my alternate lodging less than an hour later and they said they would look into it. A few days afterward, I received an email stating they have issued me a refund for one night’s stay.

Does this seem right to you? No one should have been inside much less going through our things. Despite all of my other complaints, this alone should warrant a full refund. They were trespassing. He had no reason to be in there much less hanging out with another person while we were away. How many other times was he there while we were out for the day?