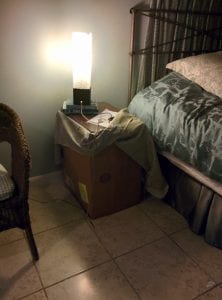 I rented an Airbnb in Naples, Florida for three weeks. It was a slum and I was robbed for the first time when they charged my credit card up front for $1500. I called customer service immediately to tell them how horrible it was and they offered me a $200 credit to move to another Airbnb. However, the ones available were of course much more expensive because it was now high season. I decided to stay there, leaving early in the morning each day and returning late at night. It was listed as a new two bedroom condo, but was actually a one bedroom with the host sleeping in the living room. It was in a slum and the host didn’t look like the person on the profile. There were broken lights, cardboard boxes for tables, broken doors and ripped screens… you get the idea.

When I left, she claimed I dirtied her towels and lost her key; for this lie, she got an additional $150 from Airbnb. I used my own towels, her door was broken, and I didn’t use a key. Airbnb didn’t listen to anything. They said I hadn’t proved my case and I even lost my security deposit. I was robbed and then robbed again. Scammers know how to play the game and Airbnb doesn’t care. I hate Airbnb.