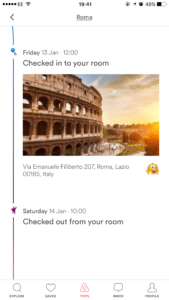 First of all, the host was no help at all when we asked about parking so we ended up checking in that evening looking for a safe 24-hour parking spot. It was too late for the host to reply about the parking situation and since English was not his first language, we had a miscommunication. When we arrived at the place, we didn’t know which buzzer to press as he didn’t mention it; it was a good thing he arrived after a few minutes or we’d have ended up freezing on the street. When we went up to his place, he didn’t let us into our room (even when we were so tired and hungry). He made us stay in the check-in area and interrogated us. The way he spoke to us was unaccommodating, rude, and disrespectful as he made side comments which made us feel awkward. Then he asked for our documents, which we denied him; this was our first time using Airbnb when we have been asked for our identification. Sometimes the way you say things is more important than what you are saying. Because of this, we were skeptical.

Before using Airbnb, we had already been asked to scan our proof of identity. We had already been using Airbnb for quite some time now; there had never been an incident where we have been asked for our documents. We understand if the purpose is security, but this kind of thing should have been elaborated upon clearly in the posting so guests won’t be surprised at what is expected of them. We can fill out a form if this is mandatory, but we will never give a copy of our travel documents as they have already been checked at Airbnb from the beginning. He kept mentioning “mafia” but we couldn’t understand what he was talking about because it was in Italian. While my husband was filling out the form, the host kept sighing heavily and making side comments which made us feel really uneasy and uncomfortable; we felt he might do something to us.

Days before coming, I asked the host if we could stay one more night and he agreed. Although I didn’t confirm it, we needed to know if we would feel comfortable staying here. Clearly, that was not the case from the beginning. We were about to leave but the host insisted we stay. We told him that we were not going to stay another night. He insisted and I confirmed we were not going to stay one more night. I may have asked him about staying one more night but I never confirmed it. How could we stay one more night if we didn’t feel comfortable anymore? Airbnb is not cheap; you can pay the same amount for a hotel room but since we like the feeling of being welcomed warmly, we decided to use Airbnb. Due to this incident, we will never use Airbnb after this holiday.

There was also no heating in our room so it was cold. There was no heating in the toilet so it was really chilly after finishing a shower. The toilet is separate from our bedroom so it was really cold. The picture of the toilet that was given to us was not shown in the listing, but only ones which were pleasant to use. We were able to sleep around 3:00 AM as noise can easily be heard from outside the window and I woke up around 7:00 AM due to vehicles outside. I didn’t get any sleep. Then I had to move the double bed out of the way in order to see the mirror. We never even bothered to use the kitchen as we were feeling uneasy already.

Upon checking out, I messaged the host to let him know that we were leaving as we had to return the keys. He never replied back so we waited for about ten minutes (I even thanked him). When we were about to leave, he came and never said a word. How comforting it was for us to leave his place. Also, I believe we were supposed to be given safety cards and should have been shown the fire extinguisher but there was none. We are not so particular about these things but since the host had an unwelcoming rude attitude, we might as well be finicky about it. I already left this review at Airbnb but unfortunately, it hasn’t been shown on his page. The reason why I booked it there is because he had lots of good reviews. Now we understand how it works. The host will not accept the review and will not give the guest a review either. This way, any bad review won’t show up. As I was looking for the host’s pictures of the bathroom, they weren’t visible anymore. Too bad I wasn’t able to take pictures of the room where we stayed as it was totally different from what I saw on the listing prior to booking.