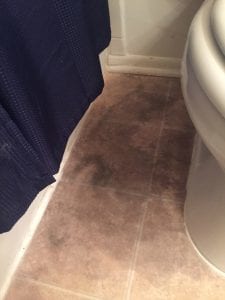 We rented a private room in an apartment in Virginia Beach for three nights for the weekend of July 4th. The apartment was listed as non-smoking, but in reality there was a strong, pungent cigarette odor that was pervasive; you could smell it in the sheets, the towels, and even stuck to my clothing. The apartment was also not very clean. There was a piece of toilet paper on the bedroom carpet. There was a ring of worn-in grime around the toilet bowl, dishes in the kitchen sink, and hair on the bathroom sink; our host did not even bother to clean the apartment before we arrived.

My boyfriend was allergic to cats and the host did not specify that a cat lived there. We filed a complaint with Airbnb. They reached out to the host, who claimed that he never smoked inside the apartment, that he cleaned it before he left, and that the grime around the toilet bowl was not actually dirt, but a stain leftover from a remodeling project. Basically the host just gave Airbnb outrageous lies.

Airbnb is essentially only an advertising platform for people renting out their spaces. Their conflict resolution center has no power to compel hosts to issue refunds or resolve issues. There is no quality assurance and no inspections of properties. Airbnb’s policy states that if you contact them within 24 hours of check-in and report issues with a listing related to cleanliness and misrepresentation, they will refund you or find alternate accommodation. In this case, we followed the rules but they seemed to take the host’s side over ours and made every effort to give our host the benefit of the doubt, despite all the photographic evidence that we submitted.