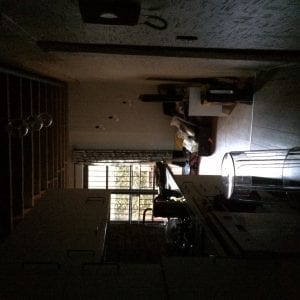 We got to our Airbnb around 6:00 PM. By 10:00 PM, we advised the host that we needed to change locations because my son was having an allergy attack. The host met us the following day but simply said that we were the only guests who complained. I hope my story will warn future guests.

The host had a very strict policy with keeping his place clean and charged 10% more than the rental fee for cleaning. The host claimed that his place could accommodate up to four people, that it had internet, a TV, a hair dryer, a washer, and heating. The photo of the place shows it is well lit. However, upon arriving to his pad, we saw cockroaches and tiny bugs in the toilet. The cabinet which held his tiny 3-kg washer smelled like cockroaches were living there. The place was really dark because of busted bulbs along the hallway, the common area, and bedroom. The internet signal kept dropping every hour and the TV was not working.

The portable heater, which could only heat a very tiny room, would suddenly stop working. When we opened the drawer of cutlery it was a mess. His dishwasher was filled with tableware which had not been cleaned well. Some food particles were still on the washed dishes . The host had a strict policy of guests tidying up upon leaving the place because he wanted to keep it clean.

His kitchen sink was almost as wide as a pencil; it was actually a small bar sink. The sink in his bathroom was not much better. The floor needed scrubbing since we could feel the stickiness while walking. The drainage would back up when we took a bath.

Finally the place was really like a dungeon because it was a bit too dark. Even in the daytime it was really very dark. Because he had limited bulbs installed, it was not sufficient to light the room. I guess I would not feel bad if he only charged AUD 100/night for his place because it was really shabby. However he charged me a total of AUD 244/night. We moved out the following day even if the host offered to replace the busted light bulbs and probably send someone to fix drainage. I will attach photos to prove my claims. Hope this will help future guests to be careful. Thank you.