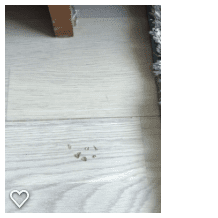 Cockroaches were in the kitchen and other bugs were found in the bathroom. I notified the host and he had to bomb the apartment during my stay. After he bombed the living area and kitchen I turned on the ventilation system in the kitchen and a very loud grinding sound came from the system; I had to turn it off immediately.

The washing machine broke the first time I used it and the host waited almost a whole week before he sent someone to fix it. The kitchen door handle kept falling off of the door and the knob in the shower fell off the first time I used it. The place was overall very dirty and not maintained, in clear violation of Airbnb safety and cleanliness policies.

When I spoke to Airbnb, the first couple of representatives and case managers didn’t seem to care at all. I eventually spoke to a case manager who basically lied to me by promising a full refund of the Airbnb service fee and 50% of the host fees. After speaking with him several times I asked him if I needed to file a refund/claim through the Airbnb platform and he told me no and that he would refund it automatically at the end of my stay.

After the trip ended, I expected a refund of what was promised to me – which didn’t happen – and got the runaround talking with different representaives and case managers. I probably spoke to about five representatives after my return inquiring about my refund and all of them basically didn’t care and were flat out rude except for one who was very nice, respectful and understanding. She had asked me to file a refund claim through the system which is currently still being processed.

This is my first experience through Airbnb and unless they give what was promised to me by their case manager and an apology, it will definitely be my last. I will not be recommending Airbnb to anyone and will be sharing my horror story with anyone who considers a stay through Airbnb. What I did expect was courtesy, understanding, fulfillment in terms of promises, and working with the host or guest through problems. So far, Airbnb as a company has not only proven that it does not care about guests who stay at the homes on their platform but also make false promises to their customers.