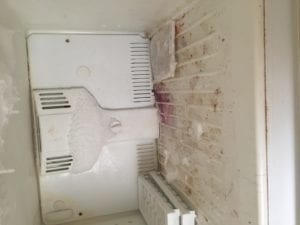 Upon arrival we noticed the home hadn’t been clean. All primary areas in which we were to occupy were dirty. The home was not clean enough to stay in. The shower had mold, and the fridge and stove looked as if they hadn’t been cleaned in weeks. The linen was dirty with stains and what looked like pet hair. You could physically feel the dirt on the comforter. There were two locks and the key wouldn’t work for the bottom. Only the top lock worked, but it became stuck and hard to turn or remove the key. Some of the windows within the home did not have locks and the neighborhood appeared slight sketchy; the overall feeling wasn’t safe for two women traveling from out of town. Overall we did not feel safe. When attempting to contact the host to inform her we felt uncomfortable and unsafe she became very confrontational and basically said she didn’t care what we did as she had her money. She stated that the house had been throughly cleaned and cut me off as I was explaining the door situation. The host knew the home she provided didn’t conform to health code standards and should have been ashamed; no one would be comfortable staying in those conditions. Safe yourself from being robbed morally, financially, and probably even physically while using Airbnb.