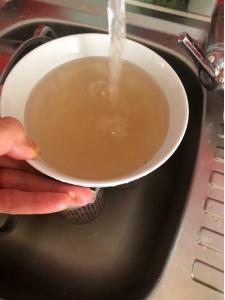 We booked and prepaid for an Airbnb apartment in Malta, Sliema in April 2018 for our summer holiday from June 26th to July 24th. Surprisingly, when we arrived, the apartment was not ready at all (green smelly / brown tab water, mold, broken sofa, fridge with a lot of frost in it (I had to defrost and clean it), broken light in the kitchen hood, broken shower nozzle), which we directly reported to the host.

We stayed six nights (seven days) struggling, hearing from the host excuse “stories” about sandstorms, African rains, and government construction works. We were expecting a quick resolution, however after several unsuccessful attempts by the host to fix these issue, we had to move to other apartment at our own cost. As you can imagine it was absolutely necessary to ensure the safety of our kids and ourselves.

The host didn’t intend to solve the problem immediately, telling us that the plumber would cost him too much during public holidays which meant for us to stay three more days without water. We had to involve Airbnb. The water issue was solved on the seventh day of our stay and after a warning call from Airbnb, the owner had to change the water tank and water heater. We didn’t want to stay in that place any longer.

Moreover, the host has threatened us with legal action for an early contract termination, which is completely unacceptable. Based on that we have applied for a refund of the remaining 22 nights, however, our request was declined by the host and by Airbnb representatives as well. We are very disappointed in Airbnb and their position on declining our request about the refund for the unspent nights. We had to go through the Resolution Center and their final solution was to refund us only for six nights spent in the apartment. We found the solution really unfair. Why should we give our money to a dishonest host and pay for services we didn’t use?