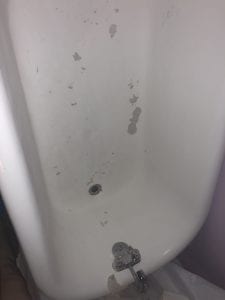 Our experience was horrible at an Airbnb in New Orleans. We paid the place five months prior to our convention and was expecting to have a great place to stay as advertised.

As soon as we arrived at the place, we knew it was unacceptable. From the posting, it says eight people could stay in four bedrooms. However, there were only three bedrooms. The previous guest wrote all over the wall, making the place filthy… and the notes were inappropriate. The washroom was filthy and disgusting. Mold was everywhere and the floor was so dirty. The neighborhood was unsafe; people were looking at us and checking the car park in front of the place. There was one comment that if we stayed a bit longer, we would get robbed. It was a serious situation. Neighbors were screaming and yelling in the middle of the night.

The same day we called Airbnb, complained, sent pictures of the place, explained our situation, and asked for a full refund. Instead they helped us to relocate to a better place. Again I had to call multiple times to be relocated. It took our Airbnb representative 17 hours to figure out how to transfer the funds to the new place. We had to pay the difference on the top of the original charge. Now, we are in the process of calling them to get that refund.

On the same day, Airbnb only gave us $500 to cover the costs and our credit card still got charged. If someone could help me: what else should I do to get compensated for this trouble? Our first day in New Orleans was a nightmare. We don’t know how we can get compensated for this matter. We all lost sleep and didn’t get enough rest; that ruined the first day of our convention.

I’ve used Airbnb at least 15 times but never again. A host screwed me over (warning: do not stay here). I had never been to New Orleans and was so excited. Six of my girlfriends and I planned a fun weekend getaway. I booked us a house that was listed as “3 miles from French Quarter” on Airbnb and paid over $1000 upfront (included $130 cleaning fee, $113 service fee, and $45 in taxes). I was boarding the plane to NOLA when I got a phone call from two of the girls saying they aren’t staying at the house.

Their Uber driver said it’s a very dangerous part of town and is considered the projects. I Googled it later and found out it was the second largest housing project in the city. There were boarded up houses on the street (something I could not have known). When they arrived at the house, two men drinking from paper bags across the street started catcalling them and made them feel very uncomfortable.

There was only one other review posted before me and the guy said that the neighborhood was “worn down”. I didn’t want to base my stay on one review, but looking back I should have. I immediately contacted the owner and said we did not feel comfortable staying there and we would be staying somewhere else. I ended up paying a fortune for a hotel last minute.

Usually a hotel would make you pay for that first night and give you the rest of the money back. Nope… not this host. She wouldn’t even give me back the $130 cleaning fee. She blamed the boarded up houses on hurricane Katrina which happened 13 years ago. She also had Airbnb block me from leaving a review because I was never inside the house. My friends did not enter the house, just parked the car in the driveway and then left after being harassed. After two months of arguing with Airbnb’s customer support, they blocked me from messaging them and closed the case. I lost over a grand and was blocked from leaving an honest review. Save your time: don’t stay here or use Airbnb.