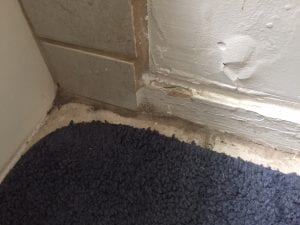 The tags more or less say it all. We arrived to an overwhelmingly bad smell, a mixture of body odor and dog pee. It turned out the sheets were dirty – I mean really dirty with hair on the pillowcase and a horrible smell. We contacted the host who sent out her mother (the head of housekeeping) to put on fresh linens.

Fortunately, we lived close (long story) so we went and brought our own bedding. After removing all of the bedding the whole house smelled better – except the dog pee – so we sort of got used to it. The bath linens were dirty too. The towels smelled of mildew but the hand towel smelled of ass, literally. I found out the hard way after washing my face. Looking closely anywhere showed a lot of dirt including dust, stains, grime, hair, spider webs, spider shit, rat shit, mildew, and more.

The filth kicker was the cabinet above the kitchen sink. There was an opening to the outside and rats have been coming into the house. Two un-set rat traps still with peanut butter residue sat patiently waiting to be used again and were peppered with rat shit. Another cabinet had three other rat traps in it as well.

The amenities consisted of a used roll of paper towel, a nearly empty bottle of dish soap, a mishmash of silverware not even making up a full complement, some pots and pans but no colander for making spaghetti, and just random barely acceptable $1 store plastic ware. I mean it has some charm, but this crap sets the stage for a lovely four-night stay.

During the stay we discovered the casita next door had a couple in it on a vacation where they never left their unit, talked and laughed loudly all day and night with their windows open we think on a recreational weed holiday. On the other side the neighbors had a nest cam pointed out their window at the Airbnb unit looking past a fence cut down low for visibility and peering into the bathroom and kitchen windows. With no fan in the bathroom you open the window only to be filmed while showering.

When you go to write a bad review and you dispute the $85 cleaning fee, this is the response you might get: “We have to keep traps because of the surrounding fruits trees. I’m sorry that you experienced uncleanliness. I will bring this to the cleaners attention. I just ask you to not write me an awful review. Thank you for your understanding.”

Fortunately they refunded that fee. I am absolutely stunned that anyone recently even wrote a positive review.