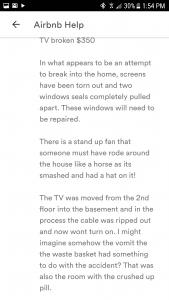 I’m currently fighting with Airbnb and this con-artist host to resolve this issue. I will post updates if possible. Here is the rundown of everything I sent to Airbnb, with a request for a full refund:

I’d like a full refund for this incorrectly advertised, poorly hosted, nightmare of an Airbnb rental. I’ll start off by explaining what was wrong with the property itself before I go into the more disturbing issue with the host. First of all, the advertisement was listed as: “massive downtown seven bedroom.” The description said it was a large home that was very spacious, with large bedrooms.

The first thing we noticed as we we drove twenty minutes past downtown was the location. A rundown, beat-up house in the middle of a bad neighborhood in the south end of Ottawa. We were disappointed before going in, but tried to make light of the situation. We walked in to a crammed kitchen, a tiny excuse for a living area, with what was supposed to be the rest of it converted into the first “bedroom”. The rest of the house was just as small and crammed.

The first thing we went to do, as a small group of six, was to sit down in the kitchen and start eating some of the food we brought with us. We went to go sit down and the table tipped over and almost broke. We lifted the corner of it and I messaged the host to tell her about the issue. She kindly told me where the tools were in her house in case I wanted to fix it. I told her I’d leave the table in the corner and wouldn’t use it instead; she had no problem with that.

The place was clean for the most part except for bugs. Only eight of us stayed the night, and only four bedrooms were used out of the six small ones available. The next day, we cleaned up what we could, except all the dishes, because we knew that was taken care of with the cleaning charge. We even swept everywhere before we left. I personally checked every bedroom and washroom to make sure the place was properly presentable and a five-star rating was completely within reach for myself as a guest. I locked the front and side doors and put the key in the lockbox happy with the overall trip even though the Airbnb was disappointing.

Then came everything afterwards. Kate messaged me asking me what I thought of the property and to give her a personal review. I gave her a review in a polite and respectful way and even praised her as a host, just to be nice. I don’t think she liked my review so that was the last I heard from her for the day.

I realized I forgot my wallet in one of the rooms and messaged Kate the same day to ask her if she could please meet me or do whatever protocol we have to go through to retrieve my lost wallet. It took her over 24 hours to reply, after I reached out to Airbnb support for the issue. This leads me all back to right now. The host just sent me a disgusting message and is outright lying in all her claims. It’s very shameful someone in a position such as herself, who manages multiple properties, would be this slimy and corrupt in an attempt to pull more money out of her overpriced rental property than she already has. I’d like Airbnb to call me personally to deal with this. The only claim that she was accurate about was us moving that 8×10 paper-thin sorry excuse for a ‘carpet’ she had on the living room floor. No one touched the TV, the windows or the screens. We never left the residence so no one was ever locked out. The host is trying to steal money and delete the mediocre review I gave her.

There’s more I have to add. The six pictures of evidence the host provided were lazy enough to help prove all of it was a lie. She showed one broken screen in the backyard of the house that we didn’t go near or had any reason to go to. She opened the garbage bag that we left outside of all the things we cleaned, and for some reason took a picture to prove something in her favor…? There were a few flakes of ash in a bathtub that they placed to take a picture of, and then there’s a picture of what looks like a perfectly good TV – no picture of the “pulled out” cord. No picture of any broken fan. Then a picture of the living room that also looks very neat and tidy. There was also one more picture of a window, one with nothing wrong with it. Apparently we broke two windows?

The house was “smoking allowed” so the years of stench from other people smoking was strong when we came in. I still feel like I’m dreaming because I can’t believe that people have to resort to this slimy low level just to make extra money. Anyways, I’ll fight this in court if I have to.