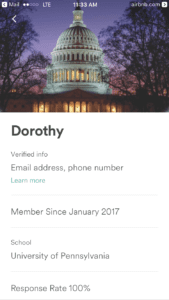 This is only the second time that I have used Airbnb. I understand the process to be: I message the host and the host returns the message and you both decide if there should be a booking. I thought I was messaging Dorothy, based in Washington DC. There is a new feature to automatically book. So that’s what happened; I didn’t want to automatically book. She has been a host since January 17th. I messaged her instantly that this had been a mistake, and requesting that she return my funds. I called Airbnb to return my funds. There are no features on Airbnb to correct this mistake. I cancelled the booking, but both Airbnb and Dorothy are refusing to give me the money back. The charge was $3389. Then I got a message after my multiple calls to Airbnb over a week and a half later that I would get a partial refund of $2477. Then I received another email from an Airbnb representative saying I would only get $2161. I said this was unacceptable. I did not agree to a partial refund, which is what he was trying to state in his email. I said I wanted a full refund. They insinuated that I couldn’t get a refund. They will not return even a partial refund if I don’t agree to their terms. This is how they trick you.

The thieving host and I texted a lot. She was trying to convince me she had nothing to do with the transactions, but as I found out later the hosts have the power to issue a complete and full refund; she is just refusing to do so. She lied and the amount she can steal from me is over $600. All because there is no recourse for correcting the automatic booking process. This is wrong and it’s stealing. I think this new feature is a scam on Airbnb’s part and the hosts (at least my thieving host) don’t care if they harm customers financially. Airbnb’s customer service is not helpful and difficult to reach. The representatives will not speak with you or hear your complaints. Then if you don’t agree with the resolution, they threaten you with getting nothing back. Dorothy from Washington DC is a scam artist because she knew this was a mistake. I tried to send her a message. I told her the second it happened because there is no feature to undo the automatic booking. She made a fast $600 with no regard to the harm she caused. I’m a hard working woman with four children, two in college. For Airbnb to have unhelpful and threatening customer service agents and thieving hosts keep these funds and not correct this mistake immediately is egregious. Beware of the instant booking. Thieves like Dorothy use this as a means of stealing your money and customer service representatives will not help you. If anything, they will actually threaten to withhold partial payments if you don’t agree with the resolution. I don’t agree with their resolution. I want and need all of my money back.