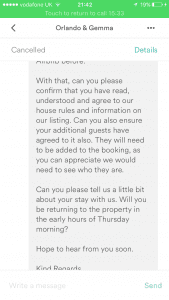 This was the first time I had ever used Airbnb. I made an account and followed the app as much as I could and then found a room for a night in Bristol with three friends. For £142 we could get one room with one bed and a sofa bed. How they can charge that much for that is beyond me but we were desperate.

I read the terms and conditions. One said no parties or events. Maybe I’m stupid, but to me that does not include going out with friends or having drinks with friends; a party or an event is so much bigger than that and I thought they’re charging a lot because they know it’s graduation in Bristol for two weeks. On top of this they had graduated from UWE and were teachers. My picture is of me: a 22-year-old girl with a glass of wine in my hand. I thought they would be fine; it’s not like we’ll be barging in at 4:00 AM with a bunch of people, playing music and carrying on. We will just need to go and sleep. There were no parties and we weren’t attending any event apart from my graduation the morning before.

The hosts then messaged me (I’ve attached it) saying things such as “will you be coming in early Thursday morning and can you please give us information on your friends for security reasons and can you finish your own form (I thought I’d finished but had a lot left to put in).” Not long after that they sent a message saying they accepted my request to stay. I then messaged back saying, “yes, we will be back in the early hours.” That’s when they got shirty. They wouldn’t allow us to stay.

After all that we were stranded in Bristol and I had forked out £142 I still don’t have, so I owe the bank money because I’m so bloody poor as a student – I am still applying for decent jobs. The hosts had no sympathy – it had not even been 24 hours since I requested a booking and they were so angry. I literally begged for a refund because I interpreted Airbnb’s terms incorrectly and they took my money and refused to give it back. Then they said they’d refund me, but they’d have to only give me the money they’re given by someone who takes the booking. I was so happy as they had told me about all the people who wanted to stay (also I had not heard or realised or seen anything about this pre-requesting thing) so I thought, “yes, I’m in luck!”

Then I saw £142 had been taken out my account. I emailed telling them the money had been withdrawn and asking if they had processed the refund yet. They told me they hadn’t because no one came to stay. I said to them, “okay, if you aren’t going to give it to me out of a friendly understandable gesture then I’m going to fight this.”

We spent four hours arguing and they blamed Airbnb for all of it and took no responsibility even though they asked me questions and took my money without even knowing my answers. People like that have no heart. They used my lack of knowledge, my age and my status of being a student to take my money. I understand that Airbnb writes the terms and they need to be clearer. These hosts weren’t even going to let me go out for a meal and drinks as they considered that a pre-planned event.

We were screwed even if we said we wouldn’t go for cocktails. I mentioned that they didn’t even let me introduce my friends. If security is breached (it wouldn’t have been; my friends are lovely) it would have meant that we would be stranded with £142 gone because they didn’t get this information before. Now they said Airbnb doesn’t have a step for this so they have to ask. What I don’t understand is why would you ask and then take the money before you even know? Essentially you’re scamming people. I couldn’t even tell them before they took my money.

I believe that because I apologised asap when I found out I didn’t realise what they (the hosts) meant by that term they should have just cancelled immediately or asked me to and refunded me so they could then accept these other people that were looking. Instead they got angry at me and acted rude. We are still arguing and I am not letting this go. I spent 45 minutes waiting to get through to Airbnb and there was no answer. I’ll keep trying. If you’re looking for somewhere to stop off before a daytime flight – as you probably aren’t allowed to leave early in the morning – then stay here.