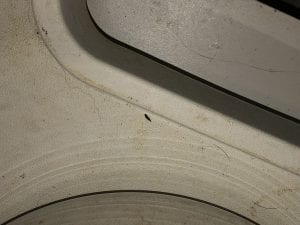 Our recent family trip was the worst Airbnb experience ever. Our trip was originally suppose to be for nine nights and we ended up leaving early due to mice. We didn’t discover the mice until our fifth night. On our fifth night at the cabin my mom slept on the pull out couch and woke up to one mouse on her leg, and another one near her head. The mattress topper for the sofa bed was all chewed up by the mice and soiled in mouse droppings. We immediately called the host in the morning to inform him about the mice. We then discovered mouse droppings all around the house. The mice droppings were in cupboards, on the kitchen counter, floors, and the toaster.

We have two young children (3.5 years old and 16 months) who were playing and crawling on the ground. I was constantly stressed and on high alert cleaning the floors because of the mice. The host responded by giving us a bottle of wine and referred to it as a “token gesture”… more like a slap in the face to us. He also set mouse traps. Airbnb asked us if we would let the host try to resolve the issue but what the host did by giving us a bottle of wine and setting a few mouse traps was anything but a solution.

The next morning my two children were watching TV on the couch and we discovered a mouse trap was missing from where the host had originally placed it. We discovered the mouse trap between the sofa arm and cushion with the mouse stuck in it… and alive. We sent a photo to the host and told him that we were leaving because there was clearly a mice infestation and it wasn’t be solved nor was it going to get solved. As the guests we should not have to stay in an accommodation that has an issue with mice, and it was wrong for the host to think he tried everything he could and refuse to issue us a refund.

How is this customer service? How the hell is he a Superhost? I am so upset that our family vacation was turned completely upside down especially because we booked it all the way back in February 2018. What’s worse is Airbnb failed to respond, and the customer service was so poor. I have to repeat my story again and again because whoever is on the phone doesn’t have authority to resolve it, and when they say they will call me back they never do. It’s a nightmare that doesn’t end with the trip – it’s ongoing and I will make sure I tell my friends my experience because I will not be using Airbnb again.