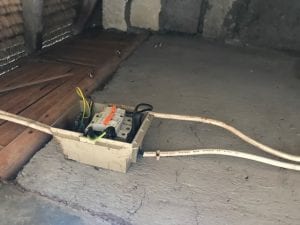 We booked a house in Bali this February 2018 for 25 days. Overall the reviews were good – 4 1/2 stars – so we trusted in them. However, as we arrived we saw that the whole house was a rundown disaster. The most it was capable of was for private use, but not in any condition to rent out as a holiday home at all.

We are pretty sure the house was built on a cliff without any permission. During rainy season the part of the cliff where the house was built on was eaten away by big rock and mudslides due to the fact that the water was running down to the sea nearly every day… that was scary. The only access to the house was over steps, but not normal steps; you had to climb around ten minutes down the cliff, over broken, irregular, slippery, tumble-down steps.

When it was dark, of course there was no light on the property. To give it a little bit more of a kick, there were cables everywhere and water pipes running over the steps; we had to clamber over them. The whole stair system wasn’t maintained at all; we all slipped away, because it was so mossy and slippery like ice. My son and I were injured on our arms and legs and we’re not too stupid to walk up steps. As we were travelling with our child, it was impossible to walk up them everyday during those 25 days. In the Airbnb listing the host didn’t even mention one word about the steps or difficult access to the house and she knew that we were travelling with our child.

The house and the whole area were so rotten and covered with trash and mud that there were rats climbing into the main room and over the roof of the bedrooms. In one bedroom, there was a lot of water damage; there was always water running down the wall over the ceiling when it was raining… and we stayed during rainy season. It was extremely humid, stinky and moldy. There was no way to use this room.

We already had the electricity break down on the first night, but we couldn’t find the fuse box. The next day the housemaid came, because we informed her an electrician had to come. He just “fixed” it superficially, but at least we knew about the fuse box. We were shocked to see an open box with just three simple fuses for the whole house, open wired cables, no FI switch, everything outside behind the house just a few centimetres away from the thatched roof. In front of the box was construction waste and big glass shards, so it was hard to get there and not get injured. The whole situation was unacceptable and really dangerous.

Not even this was not enough. The host placed two night table lamps next to the bed in the main room. One lamp had parts of a broken cable with open wires; she just fixed it with paper tape. The other lamp she extended not with a proper extension cord, just by cutting the plug from two cables and connecting them very amateurishly. This was one reason for the regular electricity blackouts until the whole makeshift wiring started to burn down under our bed. I could make the list longer and longer.

Just to be clear – the host wasn’t Indonesian. We met extra friendly and reliable Indonesian people whilst travelling over seven weeks in Bali. All the other accommodations we had stayed in were above average, the same price level with a super fair price-performance ratio. The host from the horror house came from Europe. She was travelling the world and wrote that she studied economics; she should have known better. For sure everything she did was on purpose and her whole behaviour was negligent.

We were really in shock about the whole situation and we tried hard to find new accommodations near us for a long term stay. We moved out on day 3 of 25. We tried to find a solution first with the host, then “together” with Airbnb; that’s what made the situation even more absurd. We wrote a safety warning addressed to Airbnb about this location, but they seemed fine with everything.

Airbnb’s “mediation center” decided that everything was perfect in the house and there was no refund at all for us – we paid over €2000. No apology or regret from the host, just lies and rudeness. We filmed and photographed the whole circumstance, so we could prove it all. We gave all the information to Airbnb, as we were told. We talked on the phone to our “case manager”, someone who seemed mostly trained to deny, and not provide customer service or problem solving.

The host lied to Airbnb by saying that the photos and videos weren’t from her house, but if you compare them, it’s easy for anyone to see that they are. The case manager just didn’t care. Obviously it worked better for her denying policy to just not see the issues? Just be careful with Airbnb claims – you have just 24 hours to file a report with Airbnb. After that you are out, no matter what is up. This time is set not to make it customer friendly – it is set up to exclude an enormous number of claims.

Our realistic, but not good review just came up on the page, when we pressed Airbnb. It even came up late. Normally it has to be posted within 14 days and we wrote it on the first day of the automatic invitation to review. Did you know that every guest has to write a review first and then the host has to review it before his review will be published? When he does nothing and he is clever enough, he can censor the review or even prevent it from being posted.

Of course the host gave a bad review for us on Airbnb with lots of lies and incivilities, even though we left her house with respect, no damages, no mess, and no dust or trash behind us. After all of that, we still got a bad review. This review system in our opinion is not a realistic or democratic process. We don’t trust it at all anymore, and we don’t trust Airbnb.

The house is still online. Airbnb is doing nothing, so be careful with booking with them, something I would never do again, even when there are lots of nice hosts. I’m sure I will find real hospitality somewhere else. We booked Airbnb five times. We had two really bad experiences: the first we tried to take with humor and did not complain, but the second one was enough. We put Airbnb on the case, and that’s what made the whole situation even more obvious that this would be our last time.