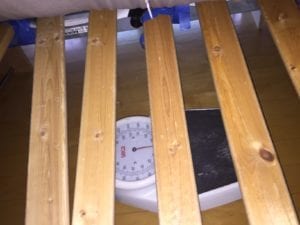 I booked an apartment for a week in Toronto in December. The listing said it was a two bedroom. However, what the host didn’t disclose was that the second bedroom had an old futon with broken wooden slats (held together with tape). The first night I slept on the old futon and had terrible back pain. The second night the bed broke. I looked under the sheets and found the issue. This wasn’t a mattress; it was a cushion. There was no box spring, just broken wooden slats. I called Airbnb who suggested I get in touch with the host to see if she could help. We emailed her and she didn’t respond for hours, saying she was out of town and could come to the apartment the next day. I called Airbnb expecting them to help. Instead I got the run around. I was told I could go buy an air mattress and they’d give me the money back. Did I mention this was at 5:00 PM over Christmas and I was sick? I was then told they’d give me $150 as a total refund. I explained I still had three nights at the Airbnb and $150 was the price per night for a hotel. They refused to give me any more money even though there was no solution to help me. I have been trying for over a month to get my money back from Airbnb. I filed a formal complaint on Airbnb and received no response for three weeks. I called eight times and was given the run around over and over again. I sent emails, and received no responses. I was promised return phone calls that I never received. I was even hung up on when I asked to speak to a supervisor. I was then sent an email saying there was nothing wrong with the bed even though it was an old futon held together with tape and that I wouldn’t be getting a refund. I am now going to go into arbitration. Airbnb is a horrible company that allows hosts to do anything they want and not support their guests.