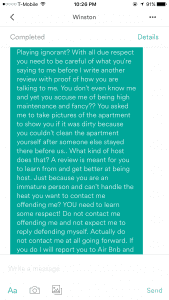 Stay away from this host and his place. I wrote a review after leaving an Airbnb that said that the place was not clean. There were bugs in the bathroom, the towels weren’t clean, and the silverware and sink were also not clean. However, I also added that everything else was accurate. That was all that was said in the review I wrote. Days after I wrote the review the host decided to contact me at night saying that my review was crap and I was not welcome in his place anymore. I was shocked that this person even reached out to me since I hadn’t even stayed at his place for almost a week. Of course I replied to defend myself and make him understand why I wrote the review the way I did which was I had the intention of being honest. After I replied he went on to say that I was too high maintenance and fancy for his place and that’s why I wrote what I wrote; I just needed to go to a hotel.

I was so offended. I replied and told him not to contact me again going forward. Nevertheless, he decided to tell me in a calmer tone that he would give me a refund for my troubles. I went on to be calm since he decided to be more respectful towards me and replied to him. However, when he said that he wanted me to edit the review to make it not be seen I was like… why?

Of course I wanted to test to see if he was trying to give me a refund because it was the right thing to do since I had to deal with the whole experience. When I told him that I couldn’t change the review he said that he couldn’t give me the refund. The funny thing is he tried to twist things on me, saying that I was trying to make him pay me to get the review changed. When it was obvious that he wouldn’t give me the refund unless I went to call Airbnb to go get the review changed, who is really trying to get the review taken off for money? After he said he couldn’t refund 50% of the money at least twice in the conversation prior to me telling him I couldn’t edit it. Airbnb has a 48-hour timeframe to edit a review, so then he said he wouldn’t give me a refund.

After that I told him that I will be publicly letting everyone know the type of host he is and I would reach out to Airbnb. He then wanted to use what I had said before and say: “You are unwelcome to contact me. Do not contact me.”

I didn’t reply after I sent my last message. This dude was so rude and so immature to be reaching out to over a freaking honest review about his place. Let me tell you: he made me take pictures of his place when I got there so that he could see if it was clean from the prior guest… what kind of host does that? He doesn’t even clean his own place and doesn’t even make sure it looks good for the next guest? He makes people do the work in making sure everything is clean… which is fine since he did state it in his handbook, but taking pictures of the place to make sure everything looks good? It should already look good when guest arrive if you’re a good host.

This was such a horrible experience for me and it made me so upset and annoyed to be dealing with something so unnecessary. For future reference, avoid places that make you clean everything for them. It probably means that they don’t care about the quality of your stay. Lesson learned.