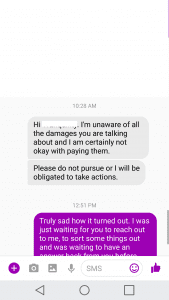 This guest used Instant Book for a month in advance for a weekend for 15 members of her family including herself. Note that she is a new member. From then on, there was no communication. She just wasn’t answering. A couple days before check-in, I finally got a hold of her and she informed me of some changes. I send her a price alteration, but time passed and she wouldn’t accept it. She kept ignoring me again. The day before check-in, I let her know since she was planning to break the house rules, I would cancel her reservation with Airbnb without a refund. Then she started responding. We finally got everything sorted out just before bedtime. One hour before checking in, she told me they were stuck in traffic and needed to push the time. Then again… and again. They finally arrived three hours late. We did strongly believe there were more than 15 people.

The first night, I got a noise complain from my neighbor. The entire group was outside, around the spa and had been screaming and very loud since their arrival. It was very late and dark, and my neighbor just couldn’t take it anymore. I tried to contact the guests, but my calls kept going to voicemail. I passed a message through Airbnb to warn her. I waited, and received no answer. I wrote to her again and made myself sound more serious. I got a response and from what my neighbor said, it took an additional 15 minutes, but the noise finally stopped. He still made it clear other neighbors wouldn’t have been as patient as him.

I arrived to check them out and found the upstairs hot faucet had been removed. How could this have happened? It was super noisy too. How could they have missed it? I continued my tour and a guest had decided to rip the lock off one of the closet to the point it ripped the door into two pieces. They forced open two other locked drawers too. They broke a large window frame probably by sitting on it or having a kid walk on it. They broke two parts of our spa and made a small tear in our spa cover. They were warned not to download anything because we didn’t have unlimited internet and they still used more than 85 BG in 40 hours. We have some decorative towels we asked the guests specifically not to touch because they already had a large number of perfectly usable towels at their disposal. Well, they decided not to listen and to only use our decorative ones. The BBQ was left in a horrific state; it was completely disgusting. This guest didn’t follow the house rules; she was truly disrespectful to me as well as the house.

I waited for her to reach out to me to apology about all the damages (my calls are still going straight to her voicemail each time) but she never did. She did text a week later inquiring about her security deposit where I finally was able to speak to her over the phone. She says she was unaware of everything. She didn’t do a tour of the house and wasn’t the last one to leave. She was not okay with everything I observed and was certainly not okay having any damaged charged to her. She said I better not charge her or she would give me a bad review. At the same time, I saw she just posted a review (a very bad one from what she said over the phone). I have some text messages exchanged that proves she indeed threatened me.

I called Airbnb and let them know immediately that she was violating their Terms of Service. They told me even if I had ”proof” and my story checked out, they couldn’t remove the review because in the text messages, she did not clearly say “don’t charge me or I will put you a bad review,” only “do not pursue or I will be obligated to take action.”

Because her review appeared at the same time, as she threatened me over the phone, customer service won’t budge. The facts speak for themselves. Airbnb guidelines strictly forbid reviews with content that is fraudulent, false and misleading, which is the case here. She had an amazing time and didn’t complain about anything. The review does not represent her personal experience. It is an attempt to use the review to force me to do something I’m not obligated to do (not charge her). They are not supposed to allow it, but they do. Thank you untrustworthy customer service at Airbnb.