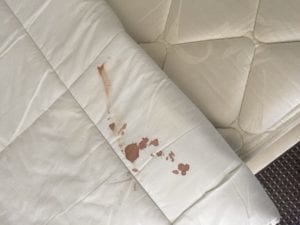 I hosted a mother and daughter at my apartment in Sydney February 17th-20th, 2017 for the entire home. I returned to the apartment upon check out and went to change the bed as is my usual practice after guests. I noticed my sheets were missing. After twenty minutes of searching I found them scrunched up at the bottom of my laundry basket under my washing. I pulled them out to find them splattered with blood. I also found my quilt underlay had been turned over by the guests and it also had blood on it. I opened a Host Guarantee claim for the damage. The guest admitted via Airbnb messages that the damage was done by the mother and they didn’t think they had to clean it, something I still find remarkable. I told Airbnb I refused to clean it because I am not touching someone’s blood as it’s unhygienic and unsafe. They refused to compensate me for the damage as they told me I had to attempt to clean it to show that it had been permanently damaged. Unbelievable!