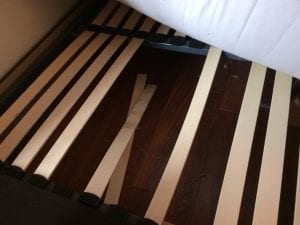 My family and I (including our infant son) took a trip in September 2017 to Paris using money we’d been saving for a vacation for over two years. While we were in Paris, we experienced a taste of the terrible experiences that Airbnb has to offer, and a taste was more than enough.

Our first reservation was with a listing that had 42 four- and five-star reviews and was hosted by a French lady. We arrived in Paris around 10:30 AM after traveling almost 24 fours with a tiny baby. The host knew when we would arrive, had our flight details, and told us to call her when we landed. We called her three times with no answer. We went to get a taxi. She finally called us back, said something in French, and hung up on us.

Once we finally got in to the listing, absolutely everything was covered in mold and the fumes from it gave us instant headaches. This wasn’t safe for our baby so we weren’t going to stay there. We contacted the host via the Airbnb platform and called customer service. Airbnb had trouble verifying my account because their site hadn’t correctly synced my new email address that I changed via Facebook (I signed up for the service originally via Facebook and had never given an email directly to Airbnb).

We quickly found their apartment was full of bugs. Once the customer service representative finally explained a way to verify the email (after twenty minutes of talking) we were successfully verified. He said he would email me so I could reply with the picture evidence of the mold. It took me thirty seconds to find the mold in every room of the apartment. It was on all the curtains, and there was thick black mold in the blinds in the bathroom, water damage in the kitchen, and mold on the bedroom wall. There was no way I was going to spend any time in the apartment with my baby.

Airbnb said they would email us within five minutes. We waited but didn’t receive an email. I called back after ten minutes as we were taking all our suitcases out of the apartment. The representative explained he hadn’t emailed us yet because he was busy on another call, but would email us within five minutes so we could send him the mold pictures. We never received that email, and didn’t get help finding a new place to stay after that first moldy one. My husband, ten-month-old baby and I were sitting with eight suitcases and bags on the street of Paris, shivering in the rain, and trying to figure out where we could go next. We felt stranded, unsafe, extremely unsupported, and very concerned.

We left a review of this listing but it has yet to be posted. It makes me really not trust Airbnb. If I was looking at this place to rent I would really want to know that someone had problems with mold there. It seems like Airbnb censors reviews.

In our study (which I’ll get to) we also found many other reports of censored reviews including some a horrible case that involved sexual assault; Airbnb allegedly told the women that this had nothing to do with the property so it was not part of their policy to allow the review. We were stupid enough to take our chances with Airbnb again, thinking the first experience must have been a fluke.

The next experience was worse: after climbing six flights of stairs with all our bags twice, we got scammed by a shady host with multiple listings for the same property who canceled our reservation in order to force us to pay in cash off the platform. The property was extremely dingy and crappy with a broken bed and broken shower. We felt very trapped. The host managed to convince us to give him a cash deposit for that night and we had to agree since we had no other choice and no place to go.

After a small amount of looking, we found that this host has multiple accounts with different names and the same listing photos over and over. To top it all off, my husband’s credit card information was stolen when he logged in to the wifi at this Airbnb listing after booking a hotel in order for us to escape the scammer. Because it was extremely unrealistic to find another available, clean Airbnb listing that late at night (and how could we trust an Airbnb listing again after the last two were dangerous and nothing like their pictures?), we were out of luck again. That night we were forced to stay in this scam place and got not a wink of sleep due to the broken bed, loud drunken neighbors, and our poor son crying in discomfort.

The next day we ended up having to fork out huge amounts of extra money and all of our 200,000 airline miles (equivalent to $3,000) to pay for a last-minute hotel in a safe neighborhood. In the space of a few days we experienced Airbnb scams, last-minute host cancellations, hosts not showing up, dangerous conditions at a listing, extremely poor customer service, broken promises made by Airbnb (they still haven’t given us our full refund, and it’s six months later), tech failures of the site and app, and failures of Airbnb’s policies to protect its guests all in one trip.

When my husband and I got home we had to ask: is Airbnb safe? This led us to do an in-depth (self-funded) research study (with the help of a PhD in user research) surrounding Airbnb and the experiences shared by over 1,000 other guests. We learned that 3% to 7% of stays go wrong (which means millions of people have problems) and that their customer service is absolutely terrible.

Most importantly, we found that Airbnb allows anyone to be a host, including convicted felons. Even after being “permanently banned,” hosts can just go ahead and create a new account under a different name. It only takes ten minutes and it’s completely unregulated, as there’s nothing in place to verify hosts’ identities – no ID requirement, and they don’t even have to use real names.

If you would like to read our article and our published study, you can find it on our website here. We also have a video exposing the scammer who got us and we have documented four different Airbnb accounts of his which were created within six weeks, all using the same listing photos. In this video we also show examples in London and New York of multiple accounts listing the same property. It took us less than ten minutes to find just these few examples, which leads us to believe that Airbnb is full of such scams.