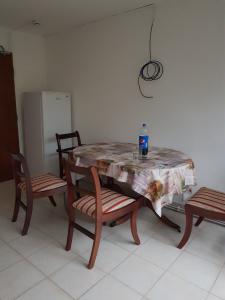 There were some issues at my Airbnb property: an unsafe environment, and unclean accommodations. It was not as described. Sadly upon arrival at the booked accommodation I was greeted by what I can only describe as the British version of Beirut. Within the property I found a substandard and not as described room which was unsafe, dank, dark and dirty. In all honesty my heart sank at the rundown room that I discovered was where I was to stay, with a balcony door that led out onto a definitively questionable easy to access area of disrepair with a lock that wouldn’t keep a Care Bear out, let alone a rapist at 3:00 AM. I have never felt so unsafe in my life.

Upon checking the rest of the facilities, I discovered wires hanging from the ceiling and walls, a garden with rubbish bags, a fridge full of expired food and quite frankly disgusting fermented urine within the toilet; that musky aroma overpowered my nose and sent me to tears. A public toilet was cleaner and safer that the property that was meant to be of a high standard.

Due to the panic attack that ensued and the pictures I took, which horrified one of my friends in Scotland, they swiftly booked me into a hotel as it was so bad there was no way any of us would of been able to sleep due to fear of my safety. The bed sheets appeared stained and mucky, the curtains were damp, and the whole flat was a safety risk with the lack of security and exposed wires above what I can only assume was meant to be considered a dining table.

This, regardless of Airbnb’s terms and conditions, is not acceptable. They have failed to provide a service to a reasonable standard. This also falls under the remit of not as described and failure to provide a standard of reasonable care to a service user. I’m requesting a full refund as well as compensation for the Uber and hotel room that was required due to Airbnb’s safeguard failings for which both receipts of which are included. I wish this matter to be resolved in a timely manner. If this is not resolved within 28 days I will be pursuing a legal case via small claims for all costs incurred while attempting to use Airbnb as well as compensation for the stress.