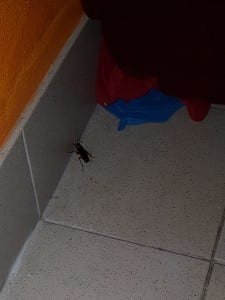 There were cockroaches, ants in the bed, and no privacy. We were even kicked out of our room for construction work. We booked a four-night stay at a place in Airlie Beach that was advertised as a ‘penthouse apartment’. The listing can be viewed here. This is possibly one of the most misrepresented listings I have stayed at through Airbnb. Advertising this as a penthouse is like advertising Adolf Hitler as a peacekeeper. It was dirtier than a Rawalpindi market, and the host, Leah, was as helpful as fly screens on a submarine. Jokes aside, here is the story.

The ‘King Bedroom’ was separated (used loosely) from a storage room by a tall cabinet and a piece of material draped over it, with a car’s sun visor leaning against it. This offered little-to-no privacy from the adjoining storage hall. The glass doors to the room had gaps between the walls, letting sound and light easily pass through. The sliding door to the balcony was old and unsturdy. It had a gap where, even if shut properly all the way, wind could come through and made sleeping at night impossible.

There were cockroaches. We saw several crawling around during our stay: two in the room (see pictures), and one in the laundry/bathroom area. There were also ants in the bed and on the walls. As we walked into the room at check-in, the building manager picked up a pinchful of ants from the floor. In the middle of the second afternoon of our stay, the building manager asked us to leave the room so that a wooden board (making up part of the wall of the room) could be patched up and fixed. We were trying to take a nap because of the lack of sleep we had on the first night.

By the second night, we’d had enough. It was approximately 8:00 PM when we looked for an alternative place for accommodation. As it was a Friday night, there was nothing available close by or within our price range ($100-$150/ night). We reluctantly spent the second night there and agreed to cancel the stay the next day, forfeiting the second half of the stay that was booked and paid for. Upon cancellation, I reached out to the host to try and request a refund for the total amount paid. We had not stayed for the last two nights, and the first two were atrocious. I did not think it unreasonable. I sent through photos of the uncleanliness and explained the poor experience we had. She sent back an animated response, wrought with spelling errors and incomprehensible sentence structure. I could barely understand the bulk of it.

I managed to deduce that she had denied the request, so I pushed on to Airbnb’s Resolution Centre. After several email exchanges, the case manager concluded that as per the terms and conditions, 24 hours was the window for cancellation and receipt of a refund. He offered a credit of 49 AUD as compensation towards my next stay. I responded by saying I would not be using Airbnb again to redeem this credit, so it is useless. I explained 24 hours to request a cancellation was an unreasonable part of the terms and conditions, as the bulk of the issues were encountered after this window. I referred to the ‘extenuating circumstances’ clause, highlighting the exception to their policy of ‘severe property damage or unforeseen maintenance issues’. He ignored this. He thanked me for my time in corresponding and my understanding in the matter.

Needless to say, I couldn’t understand a single shred of logic observed by this case manager. I initiated a chargeback through my bank for the $400 charge to my credit card. The outcome is pending. I have resubmitted a formal dispute with Airbnb. The result is pending. I have also investigated using the ACCC (Australian Competition and Consumer Commission) regulatory body to lodge a dispute. This will only take place if my bank is unsuccessful in recovering the charge. I’d like to note that this is not about the money, so much as the principle. Even if my bank is successful, I would like to warn users and non-users of Airbnb’s unreasonable customer service policies and poor support, as well as this host’s lack of consideration and diplomacy with respect to her guests. Stay here at your own peril.