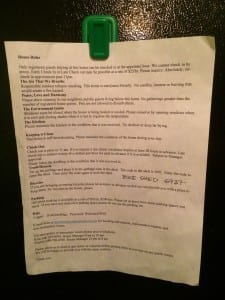 I recently had a horrific Airbnb apartment rental, in which I was harassed and threatened with eviction by the property manager for breaking house rules, even though none were broken (a picture of the house rules, which is on the apartment refrigerator, has been provided). It seems she has a history of threatening eviction, keeping the renters money, and even having her husband nearly getting into physical confrontations with renters as I found out in other posted reviews. The property link can be found here. The following is the review I posted on Airbnb:

“The apartment is very nice, but unfortunately I had to cut my stay short due to harassment by Kim, the property manager. She met me at the property and seemed like a nice lady. The apartment was clean, in close proximity to many local attractions, and as described in the listing. Later in the evening, things turned very bad. Three friends and I were walking back to my friend’s apartment and I thought it would be okay to give a quick whirlwind tour of the place I was renting which just happened to be next door. My friends and I were in the house for less than five minutes. No one sat down, had anything to drink, or even went to the bathroom.

About 15 minutes later I received a text from Kim asking if I had read the house rules on the refrigerator, to which I said yes. She then sent another text asking if anyone else had been in the house, to which I replied yes, I quickly showed my friends around. I was told I violated the house rules, and I apologized. She then says she will not be penalized for cancelling my reservation. I then called Kim to explain the situation. Things became much worse. I tried to tell Kim that I did not have a party, event, or gathering. She would not let me finish speaking, cut me off, and then began with verbal harassment. I was told I was not truthful (which I was throughout the conversation), I was not honest, and that I was “a man without honor.” After which, Kim then said that maybe she would kick me out in the morning, and hung up on me.

No guest should ever have to put up with this kind of abuse. Especially when the rules were not broken. According to the house rules, there are to be “no parties or events” or “no gatherings greater than the number of reserved guests allowed”. There was no party, no event, and I would not call four people doing a quick tour in under five minutes a “gathering.” During the one night of my stay, I did not get any sleep after being threatened with eviction. I called Airbnb in the early morning to cancel the rest of my stay and report the harassment I received from Kim. I was able to get another Airbnb apartment at the last minute, and went on to have a nice stay in Portland. I cannot properly convey my disappointment with the property and its manager, Kim. The disrespect shown towards me was not justified in any way. When I am being honest and respectful towards someone, I expect the same in return. That did not happen here. I believe everyone looking at properties managed by Kim should think twice and look elsewhere.”