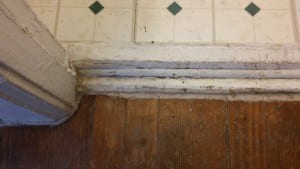 The apartment was described as “cosy”. It was not. The place was dirty, dingy, run down and misrepresented. After two days of a four-day booking we could not take it any more and moved out to a hotel for the rest of our stay in Washington DC. We have not asked for a two-day refund yet because we were just so glad to get out. I notified the hosts, “Steven” and “Jane”, we were not happy with the apartment (without providing any details) and thanked them for their help before we arrived and also for the cleaning credit. We have heard nothing back from them. Like many other guests, we never met them before this trip.

Steven and Jane call it their home. We saw no evidence that it was used as a permanent home. For example, a complaint from another guest this summer about a big hole in the wall where there was an electrical plug in the bedroom was still there in mid-October of 2016. The small gas stove was so filthy inside and out that no one would ever want to use it. The air intake in a hallway was covered in dirt and could not have been cleaned for months or even years. There was no evidence at all of any male presence… and no man would ever put up with a toilet seat that would not stay up. The bathroom tub was rusted around the taps and the ceiling was peeling off above it. The place had not been painted for years.

To us this apartment looked like it was simply a substandard rental for unsuspecting tourists. It is in a very old run-down building which, unlike many similar buildings in the area, has not been kept up. The hallway and front door outside the apartment is filthy. When we arrived the place had not been cleaned. I contacted Steven and Jane by text and was promised a refund of the cleaning charge. So far we have not received it. The only good thing about our short stay is that people in the area were all very friendly. The attached photos are only a small sample of what this “cozy” apartment really looks like. I could only post five photos; they did not include the hazardous kitchen wall plug that has several adapters added to accommodate all the appliance plugs. We will be filing a complaint with Airbnb and also with the Washington DC Department of Consumer and Regulatory Affairs.