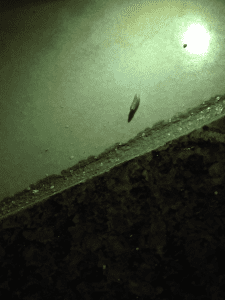 Let me start with the link to the luxurious, custom and tastefully decorated house we rented in Union City, California. Whatever you do, don’t believe anything you read concerning this house on Airbnb and don’t rent this house. If you do, you won’t be able to say I didn’t warn you.

We rented this house because it was big (for seven people), it seemed nice, it was well situated for us, and the comments of past renters were all good. The stay started with the host saying that the house was not ready for us when we got there, one hour and a half after the check in time. The host then told me that he was told by the last renter that she might have heard a mouse during the night. We later learned that this was a lie because when the comments of the previous renter was posted, after our arrival, the mouse traps were already there before she got there.

The next morning we went away early for the day. We had time to see that the place was not very clean. We ate out that night and got home around 10:00. To our disgust, we killed two roaches in the kitchen. That was when we first contacted Airbnb. To our surprise, Airbnb replied immediately. We said we were disgusted and we wanted out. They told us we had 24 hours upon our arrival to file a complaint so we could get out of there with a refund. We had been there 28 hours.

To make a story short, here is a list of all the issues we experienced with the house and Airbnb:

1. We saw a mouse, we killed two roaches and we found many other bugs in the house.

2. The stove was out of order, the BBQ grill was disgusting, and there was supposed to be a gaming room with pinball machines, foosball, and pingpong table.

3. The house was not very clean: curtains were stained, the BBQ grill was disgusting, the doors to the bathrooms were dirty, the windows were filthy we could barely see through, and on the side of the house we found a dozen empty old paint containers.

Attached you will find a few pictures to show some of the nice things we had to live with. You should also know that these three points contradict two of Airbnb’s standards and regulations. However, Airbnb doesn’t care about their own standards and regulations and their customers. Like I said earlier, Airbnb were very quick to respond and seemed very helpful. We had constant contacts everyday. I was on vacation and the last thing I wanted to do during my vacation was run after Airbnb customer service.

In fact, they were not helpful at all and they were all but productive. I had seven case managers involved in my case, all seemed very understanding of my situation but none of them answered my questions. When our trip was finally over, I asked for a refund. After a few exchanges I was told that I could get a partial refund by one of the case managers involved. He changed his mind because the host sent him a copy of the invoice of a pest control company that supposedly visited the house during our stay and it said there weren’t any traces of vermin in the house.

I didn’t believe a pest control company came to the house so I asked to see the invoice or the name of the pest company, but Airbnb told me the host didn’t want them to share that information with me. Talk about transparency. If you have nothing to hide, show me the invoice, right? Not with Airbnb. The host did not want them to share it with me. I didn’t believe that a pest control company came because the host told me that when it came it didn’t find traces of vermin.

That same night we found traces of mice in two different places in the house. Then the host told me that the bag in which we found different bugs under the fridge were long dead according to the ‘pest control company’. In fact, I had killed the bugs myself the night before their visit. Lastly, we found rolled up paper coming from the mouse traps on the counter after their ‘presence’. It is not very professional for a company to leave their trash on the counter after they left, isn’t it. One last thing: my reviews, that were very negative, were never posted on the site. Maybe that is why we see few negative comments concerning the houses we can rent on Airbnb. Transparency…