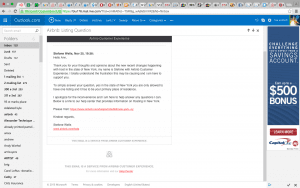 I am so disgusted with airbnb that I have been seriously branching out to other sites.  Anyway, the owner or manager from New York Stay called me and we talked for over one hour yesterday. She told me that the reason airbnb is dumping super hosts in NYC is because of the law here. She said this has been planned since airbnb came out with the warm and fuzzy campaign and the new logo. I asked airbnb about it and they said yes it is true. They are dumping you if you have more than one listing in NYC. The thing is that if airbnb did not have a financial stake in the process, they would not have to do that. If they would just collect a commission for hooking you up with the guests, and stop with holding the money to collect interest, stop with the 1099s, stop meddling with unqualified arbitrators, and just take their 15% and then have the guest pay the host directly and use the host’s contract, they could spend there time making sure the listings on their site are all real instead of causing grief for people due to their unethical incompetence. This company is a nightmare!!!! Plus, they could have warned people about this when they came out with the new warm and fuzzy campaign and that stupid logo.