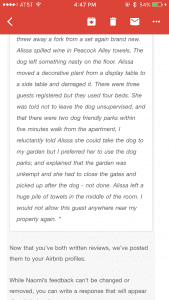 Here’s what happened to myself and my group in Charleston, SC with an Airbnb host. When we first booked the place, we disclosed that we had a service animal with us. He was not an “emotional support dog” or “therapy dog” or “doggie” as the host called him. This is a dog trained specifically to help someone with a disability. She first asked us if the guest was blind; this was a little rude, but okay…

Our guest does not look disabled, but you do not have to look disabled to have a service animal. It’s like asking someone in a wheelchair why they can’t just walk. I have manners, so I would never ask something like that. She then told us to keep the dog off of every surface in the house and to keep him in the garden. The garden was a junkyard shared with two other random dogs. Mind you, the dog isn’t “well behaved” but literally trained to provide a medical service.

We had the dog with us at every point during the trip and he was in the house only when we slept. He has to sleep with his person so this was non-negotiable due to the nature of the disability. He didn’t get on the couch or on the other beds. While I understand ignorance, this is what followed.

The owner had us followed by her brother who lives on the property. We saw strange people staring at us out of windows and hiding behind cars. We are normal professionals and never once got rowdy at the house. I personally got rowdy and didn’t come back to the house one night, but that’s besides the point. We left the house in pretty normal condition, the only exception being the towels. I put them in the washer and next to it because I didn’t want to ruin the floors or leave them on the beds.

Apparently the single bite of dog food left on the floor and the fact that there was a dog present was enough evidence to charge us $300. We also lost a fork? She then went through the house and itemized everything we did wrong. This included ruining her towels, moving a plant, sleeping in the fourth bed (perfect for midday naps), ruining her sheets, ruining her blinds, and letting the dog poop in the garden. None of these things happened, including us letting the dog poop on the property because we were too scared of the garden. We are also respectful people with access to bags.

After having us followed, being incredibly invasive and rude, and discriminating against a legitimately disabled person, the host had the gall to write this review. This is what I have to say to her. We spent $1000 to stay in a subpar illegal rental in downtown Charleston. Her sheets were uncomfortable, her house was dingy, the floors gave me a splinter, and the only redeemable aspect of this stay was the location. Additionally, I spent two years learning a thing or two about special education and every aspect of her questioning guests violates the Americans with Disabilities Act as well as a basic right to privacy. Sorry about the dog kibble that was “disgusting” but it was clearly an accident. Also, our four legged working professional is a hard working man on the clock and a good boy off the clock.