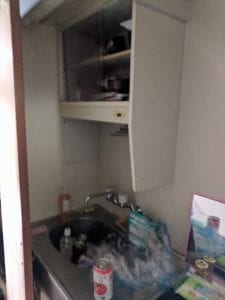 I stayed with a host who is quite literally one of the most unpleasant human beings I have ever encountered. How she has any good Airbnb reviews is beyond me. Her communication skills are beyond deplorable. The following review is for this listing in Tokyo. I noticed that she was very rude when I first asked her if it would be possible to check in early. A simple “no” would have sufficed; instead, she went on a rant. Given that she is Japanese, I brushed this rudeness off as her not being familiar with the English language and maybe she didn’t understand the underlying connotations of the words she was using. That was a mistake.

We arrived at the apartment, which looked like an absolute pigsty. See the attached photos. It was absolutely disgusting and not even the same apartment that was listed on the website. The host lied, in that it was not her apartment. I say lied because the key was in a specific mailbox with a code that she had given us, so it was practically impossible that we “by chance” got the wrong key and went to the wrong apartment. She kept lying and trying to blame us for her mistake. She also never offered to come help us. In fact, in the beginning we couldn’t even get in touch with her. Instead her husband who spoke no English was answering the phone.

Eventually, after a 21-hour flight I was fed up and went to a hotel. Then I proceeded to call Airbnb for a refund. It took over an hour to get my refund but finally the Airbnb case manager discovered that it was her apartment and that she had double booked it. Because it was her fault, Airbnb forced her to give me a refund. Afterwards, she left me a negative review. Why she was able to review me when the reservation was cancelled is beyond me. I had to call Airbnb to get that fixed as well.

Needless to say I will never use Airbnb again. Just realize that if something like this happens they pretty much leave you high and dry. The host should apologize for what she did but is such a horrible human she never will. She is lucky I didn’t leave a review on Airbnb and ruin her obviously fake reviews.