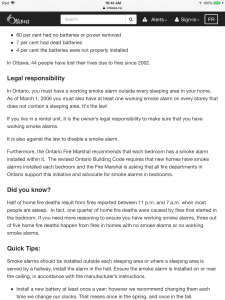 We booked this house for our kids to stay in downtown Ottawa after their grade 12 prom. The host charged five times the regular price but unfortunately, the kids paid it because there were few options for them that night. That price was robbery alone. The host knew our kids would be there and we assured him there would be no problems: no mess and no parties. It was for them to sleep after the final prom party and get up in the morning to meet others for a final graduation breakfast.

We parents (four of us) went to the house first and it was uninhabitable; the temperature was 33 Celsius. We walked in and there were two useless fans and the smoke detector had been unplugged. There wasn’t even any soap in the bathroom. It was so hot and humid. The smoke detector was disabled by the host during the day.

We contacted him for more fans but there was no reply. We told him it was unsafe and against the law to not have a working smoke detector but he did not take responsibility for his house. Our kids could not even stay there as it was stifling hot, too few fans and the detector had to be unplugged or the alarm continued to run. He replaced the detector the next day but that was too late for our night. He would not refund the price of the rental and ignored our request for more fans the night of the rental.

Airbnb offered $100 of the $700 rental for the house yet the kids did not even sleep there. They went in, changed their clothes, and left. We grabbed their stuff and we would not let them stay there, as it was unsafe to stay there. He should not be allowed to rent out a house when it does not meet safety standards. This is unacceptable, irresponsible and to not refund us is robbery. It is illegal to disable a smoke alarm and he did that before we entered the house.