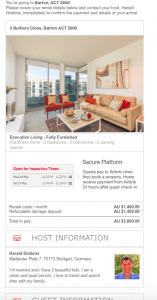 I was recently scammed out of $2,800 for paying what I thought was a security deposit and the first month’s rent for an apartment on Airbnb in Australia. I found the initial listing on Domain; it looked like a private rental with the listing asking any interested parties to email rentscall@gmail.com. I had a response back from the owner ‘Harald Grabner’ (lab.teacher@novartis-pharmaceutical.com) who explained the apartment to me, attached scanned copies of his passport and license (see above), and explained that as he lived in Germany the rental (inspection and handover of keys) would be handled by Airbnb.

He explained the process and said that in order for Airbnb to put me in their system there would be an upfront payment (the $2,800 mentioned above) which would be held by ‘Airbnb’ and released to him if I decide to take the apartment. If I didn’t like the apartment, it would be immediately refunded. He told me that Airbnb would be in contact soon.

I received an email from ‘Airbnb’ with deposit information, which looked exactly like the other real emails I had received from Airbnb in the past. I transferred the money and in a few days time got confirmation from ‘Airbnb’ saying the money had been received and that an agent would be in contact to make arrangement to view the property but wouldn’t be for a couple of days, as he needed to come from Perth. I was never contacted and the real Airbnb has no record of my payment or emails. Beware: the emails looked exactly like the real Airbnb emails. The real Airbnb will never ask you to transfer money off their site. Lesson learnt.