I needed a room in Seattle for one night, while I picked up my 30-year-old daughter who lives there but doesn’t have an extra bed. I found a room near her, but the Airbnb post asked for a $1500 security deposit on a $90 basic room. I had the following exchange with the host:

Me: I’m interested in staying for one night while I visit my daughter, who lives in Seward Park. I read that you want a $1500 security deposit. I’ve never been asked such a thing before. I’m a 65+ year old woman, visiting a 30-year old daughter, and not about to trash your home! Promise. Do you really need that much up front?

Host: You may be interested in learning that the minimum wage in Seattle is now $15/hour

(She then declined me, saying the room was booked, but it remains posted as free.)

Me: I think that’s great that you have a $15 minimum wage. But did you decline me because I questioned the security deposit?

Host: Yes, in part. I’m not looking to get into any arguments with fussy guests. I’m sure plenty of hosts would be delighted to host you, I’m just not one of them.

Me: I wasn’t arguing. I was asking. Respectfully.

Host: You’re asking why I have a high security deposit? Why do you think? Anyway, I am not going to book you. I suggest writing or calling Airbnb or doing research on Airbnb Hell for further questions on the topic.

Me: Wow! This just feels rude, and no, there aren’t a lot of choices for one night near my daughter, who is in southeast Seattle. Her fiance unexpectedly returned from a trip abroad, or I wouldn’t be looking at the last minute. And I assumed you wanted $1500 because most of your guests are young, stay for longer, and are potentially unreliable. But I have excellent reviews, and think of myself as quite low risk. So this all feels rather harsh as a response to a reasonable query. But you are definitely wrong about there being a multitude of choices near her. And you’re losing a very easy guest.

I found her response to be unbelievably rude, and I wonder if this is actually age discrimination, because I did tell her I’m over 65. I can find no other host who asks for $1500 security on a one-night stay in a $90 room. I am really annoyed at her treatment of me. She runs these two properties.

We booked a room through Airbnb for three nights in Seattle. There were four of us staying in the room. We are all from Orlando, Florida, and booked this vacation because we were headed to Alaska on a cruise. We left May 10th and had a layover in Houston. We were supposed to receive an email confirmation for check-in 24 hours before the 10th but never received a call or email. We decided to call them in Houston to make sure we could check in at our scheduled time. When we called they proceeded to explain to us that the guest who stayed in the room the night before had completely wrecked the place and it needed to be inspected to make sure it was safe for us to live in for the remaining days. The man on the phone sounded sincere at the time and said no matter what happens he would set us up in one of his other places if the inspection came out negative. He also offered to send a shuttle to the Seattle airport to pick us up and bring us over to our room.

At this point we figured everything would work out okay when we landed. After a 4.5-hour flight to Seattle we made it and called Saigon Hospitality (the host) to let them know we were waiting on them. There was no answer. We called a few more times; again, there was no answer. We all called from our phones probably 5-8 times each. At this point we decided to get an Uber and go to the Saigon Hospitality Office so we could check in and get settled. We arrived at the office; the door was locked and there was a large window in the front through which we could see inside. Inside there was a lot of furniture. It looked like the furniture to the room in which we were supposed to stay. It was all stacked in the office front room as if they were using the office for storage.

We headed over in another Uber to the address of the room we were supposed to be staying in. It was a large building that was locked with no numbers or indentification outside. I asked some people going inside if it was residential and they said it was strictly an office building. At this point, we were on the side of the road in Seattle, with nowhere to stay and an Airbnb that was paid for in advance. Once again, we called Saigon Hospitality. There was no answer. After thirty minutes of waiting outside in a city with which we’re unfamiliar, we called Airbnb to see if there was anything they could do.

Let me just say that I used to love Airbnb and never had issues with them until this day. However, I will never use them again because of this event. Airbnb told us that they would try to call Saigon and see if they could reach them. They got no answer. We spent anywhere between 45 minutes to an hour and a half on the phone with Airbnb back and forth. Airbnb said there was nothing they could do for us except refund our money. They also said they would pay back our Uber rides and $25 for food. So they told us to wait it out and they would call us back.

Imagine being in a new city with four huge pieces of luggage on the side of the street without a place to go. We paid over $500 for our Airbnb and it wasn’t guaranteed when we got there. Airbnb said they wouldn’t find us another place until we waited a few hours to hear back from Saigon. We were already on the sidewalk of 1st Avenue for two hours. We started looking for hotels, only to discover a convention was in town and all hotels were $400 a night. We struggled all day to find a place that was available to us for three nights. Airbnb never called back so we called them after we finally found a new hotel, and sent them our receipts for Uber.

Ten days later, and we still have heard nothing from Saigon Hospitality or Airbnb. Airbnb is a big company all around the world, and I will never use them again. It’s their responsibility when a hospitality management company leaves you stranded to find you a new place. Nobody helped us from either of these companies. Honestly, it takes very heartless, selfish, and terrible people to leave their guests on the streets for hours with no place to go. They didn’t have to tell us they would send a shuttle; all they had to do was call us back. Saigon Hospitality has some terrible people working for them – this is not a company worth giving your money to. Don’t book with them. If you do you could end up starting your vacation miserably.

Airbnb is unreliable and that’s why I can’t book with them anymore. We got lucky that we were stranded in our home country. Imagine if we had booked a property in another country and were left on the side of the road. Airbnb should have something to fall back on when their hosts screw you over. They don’t and therefore they are an unreliable company that doesn’t deserve our money. I would rather book a hotel and know there’s a roof over my head on vacation. 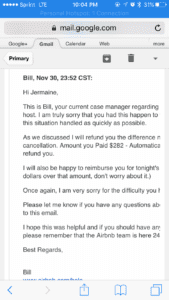 I work about 12 hours a day, 6 days a week dealing with rude people with a lack of common sense. So I thought, “Hey, you deserve a vacation!” I chose Seattle. I had my flight ready, which I found at a cheap price. I was able to find a city pass voucher to see all the tourist hotspots in downtown Seattle. All I needed was a reasonable place to stay. I had heard good things about Airbnb. All the photos posted and advertised “as seen on social media” made me think people stay for a good price. So why not? I found a very cheap home in downtown Seattle. The host sent me an email about a smooth approval. All was charged and everything was good. I even got a few emails about my stay was coming up. I set my entire itinerary solely around this place, even calculating how much Lyft was going to be versus a rental car. Luckily it was so close I didn’t have to spend more than $5 for each Lyft ride. Sounds like a dream right?

Wrong. I showed up at the Airbnb at 3:15. I called and called for over an hour. I even banged on the gate… nothing. I went to a local cafe to continue to call and call. Nothing. I left voicemails, texts, Airbnb messages and received no response. No answer. I contacted and searched all over the Airbnb website for any type of help. Nothing. I finally came across a forum with their 855 number. I called so many times. I was on hold for 30 minutes after the automated button pushing. At this point it was 8:00 PM and I had literally been trying to reach someone for three hours. I got desperate and booked whatever I found. I went there, checked in, and continued to call and call. Nothing. I contacted the hosts on their Instagram, Twitter, and Facebook. No answer. I gave up contacting the host and Airbnb. I accepted defeat.

At 10:23 PM some useless “case manager” named Bill came to the rescue… or did he? He is the textbook definition of a 45-year-old dude that lives in his mother’s basement. He seriously couldn’t care less about helping people. He had the audacity to tell me that he didn’t believe me after I told him I had been trying to reach Airbnb. His customer service skills were equivalent to those of an Emo child at hot topic not accepting your return. He stated he was giving me a full refund and reimbursing me for the hotel I had to book at the last minute. I’m currently here at my hotel, writing this and praying I actually do get a refund. Here are some nice pictures that prove Airbnb is a waste of time. Seriously, book at your own risk.