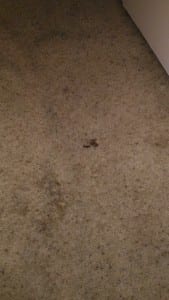 This was my first trip to California. I have wanted to visit since I was a child, so for over 40 years. Now with the whole family – my wife and three teen daughters – it was about to come true. I was initially going to use VRBO which I have used with great success in the past but found what I thought was a great deal on Airbnb. Since I heard all the buzz about Airbnb, I thought I would give it a shot. What could the risk be with Airbnb behind me? Ha ha…

The fact that the apartment was in Downtown LA was some concern to me but not having been to California and in the excitement of the moment, I neglected to research just how much traffic there really is in the area; I will accept responsibility for that. Prior to booking I did repeatedly ask the host about the safety of the apartment and the surrounding area and was met with the response: “It will fit you perfectly.” Upon arrival, the initial impression of the complex was acceptable with a nice looking pool, architecture and grounds. However, once we began the ascent into the facility I began to have that sickening feeling when something just isn’t right. Musty odors and the smell of drugs were present as we walked the halls to the apartment. Once we entered I immediately tried to remain calm,though I was not pleased with the condition of the beige carpet, paint peeling off the walls, and a refrigerator containing old food.

Needless to say, below is what I wrote to our host and a representative after I decided to leave the following day. Yes, we stayed the first night as we were all exhausted after the seven-hour flight and fighting traffic to the apartment.

After some careful deliberation, we have decided not to stay in your rental due to the reasons listed below. As a result I would appreciate a refund for the balance of the days we will not be staying as even a cleaning will not make up for the fact that my daughters are uncomfortable with the environment and I don’t wish to subject them to the marijuana odors that waft through the halls or patio doors. I would appreciate your cooperation and will leave the keys with the concierge.

– Dirty, not cleaned well or recently

– Carpets are dark with dirt blotches and contained some sticky substances. I was afraid to remove my shoes.

– Old food in refrigerator and cupboards

– Unsafe surroundings not as described. My daughters were harassed outside the apartment even by pool area

– Dining seats are all stained, not appealing to enjoy a meal

– Food spillage down the kitchen cabinets and stove top dirty, making it unappealing to cook.

Following the above message to the host, I received a message from Nick at Airbnb who indicated that I had not followed Airbnb policy (when in fact I did, other than waiting around for the host to provide a resolution… with only five days available and the severity of the situation, this was not possible) and that I could open a refund request in the resolution center, which I had already done.

My response to Nick:

My first email was to Mike the Airbnb host, and I then opened a case with Airbnb within the 24-hour period as per the guidelines. Mike has rejected my refund request, following which I selected the option to involve Airbnb. As to finding a remedy, this situation was not able to be remedied in a timely manner as we are only in California for five days and it would be unreasonable to believe the apartment carpets and seating could be shampooed and other areas brought up to a clean standard in a reasonable time frame. Please review the pictures, as I am not sure anyone could clean what should have been done before even stepping foot in the facility. I was not about to put my family through this type of situation any longer than was necessary especially for Mike to come by to talk. The only resolution suitable would be a refund as these are distrustful and manipulative tactics simply to rent out his location. In addition, the safety factor is completely beyond the host’s means to correct, along with the elements of drug use; they are out of his control. My primary concern at this point is to ensure my family has a safe clean location to spend the rest of the short vacation in the time we have left. Had the host represented the location as not suitable for families this issue could have been avoided. I even questioned the safety of the location and was met with: “It will fit you perfectly.” I have used VRBO and hotels without issue in the past so this was a very stressful situation and caused me to seriously not trust Airbnb fpr future bookings, especially if there will be no support or protection for guests. Perhaps the host should have been more thoroughly vetted, as I would be shocked if any family would find this location acceptable. I have initiated the process to involve Airbnb and get a full refund.

Thank you for your patience while I reviewed your case. I appreciate the time you’ve taken to share your concerns and perspective on this experience. Based on the information provided, I have decided that any refund will have to come directly from Mike based on our refund policy which you can read upon within the previous email. Thank you again for your understanding and for your valued time and contribution.

So even after providing pictures as to the poor cleanliness of the apartment and the fact that my daughters were harassed – two conditions specified by Airbnb as reasonable – our request for a refund was still rejected. This issue is current as of April 26th, 2017 and I am still trying to fight it. Although with no response to my emails and no contact information for Airbnb as they don’t clearly list any means of reaching a representative or manager, it is tough. I do appreciate the contact information for Airbnb found on this site.

I rented my lovely Whistler townhome to someone who claimed to be a 27 year old coming up with his partner and another couple for a weekend to explore Whistler and the surrounding area. They were actually a group of at least 7 guys, probably younger than 27, who threw a big party at our quiet complex. There was evidence of cocaine, pot, cigarettes on top of the hundreds of beer cans and liquor bottles left behind – not to mention all the dirty underwear and various personal belongings they forgot. There was vomit on the curtains, cigarette butts and vomit on the balcony. Neighbors reported a loud party with a disco ball, loud music and women that appeared to be strippers/prostitutes. My cleaning lady told me she has never seen such a horrific mess in her 8 years of working in Whistler! My cleaning lady took 12.5 hours to clean my home, which normally takes 3 hours. Of course this came out of my pocket. Despite having photos of the mess and an invoice from my cleaning lady, Airbnb offered me no support and gave the guests’ damage deposit back! I have a strict no-smoking policy listed in my house rules on their website, and despite photos of cigarette packages and butts, they wouldn’t even support me for that! I am shocked and appalled by their lack of customer support and promptly delisted my property. I also have my home on VRBO who are much more supportive of their hosts. I will stick with them!