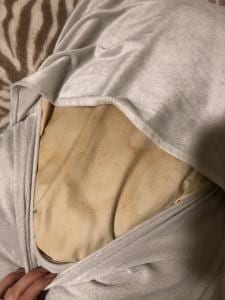 This is my Airbnb horror story from my stay in New Orleans with my sister. I will preface by saying that both my sister and I have traveled the world, been to many different countries, and stayed in hostels many times, but never had an experience like this.

We booked a room in a house in New Orleans. The house stated that it was on Frenchman Street. For those of you who are not familiar with this area, it’s a popular destination in New Orleans, lined with bars and restaurants where all the locals go to listen to live jazz music. Unfortunately, Airbnb does not disclose the exact address of the house until the day before your stay; they give you a radius to give you a general idea of where it’s located.

Well, when we arrived at the house it was on the very far end of Frenchman Street, not at all walking distance to that area as described (nor would it have been safe to walk, day or night, male or female, ever). It was in a very bad, crime ridden area with bars on many of the windows and doors, and wood paneling covering windows that had been blown out. The house was not at all how it was described in the ad.

We stepped outside for a moment to contemplate if it was safe to walk just around the corner to Walgreens, and within a few minutes someone made an attempt to rob us. I will spare the long details of this but luckily we escaped the situation unharmed.

When we ran back into the house we discovered that someone left the door to the back patio unlocked. This was a shared space, meaning other guests were staying in other rooms just down the hall. Luckily no one had entered the home from off the street but we feared that if the guests accidentally left it unlocked again, someone could enter the home in the middle of the night and rob us… or worse. There were no locks on our bedroom door, leaving our belongings at risk while we were out exploring the city.

I realize that New Orleans suffered awful devastation from Hurricane Katrina and is still recovering. It’s really sad, but Airbnb should be more forthcoming about the state of these houses/rooms. This place was completely misrepresented. It said there was a “porch overlooking the yard as well as the street… and two sets of French Doors that open up onto Frenchmen Street, letting in plenty of light and allowing for prime people watching.” The French Doors in the kitchen were bolted shut, and the only view from the porch was a very tall fence that separated the back of the house from the street. We couldn’t view the street as stated.

In addition, the house was unsanitary. The pillows were stained brown (very brown, spotted, disgusting – see pictures attached), the towels that were folded and placed on the bathroom counter were damp and smelled like mold, and the toilet wasn’t completely bolted down to the ground. We did contact our host and were as nice about it as we could have been about our complaints (although in hindsight we shouldn’t have been).

Overall, the conversation was amicable but he was very defensive and didn’t seem to care very much. He said that what happens in his neighborhood outside of his home is out of his control – which I agree with, I blame Airbnb for that portion. When it came to the pillows he didn’t seem to care; I don’t know how you can look at those things and think it’s okay to let people sleep on them. Unfortunately, Airbnb has a refund policy that protects them from just about anything.

We contacted their customer support line immediately and worked with a case manager in an attempt to get a refund, but they refused. They said that they cannot refund anything due to neighborhood factors, only things pertaining to the house itself. We sent the pictures of the house and everything inside that was dirty (including those nasty pillows) but they still refused. We were also shocked that there were no prior reviews about any of these things, which led us to believe that perhaps the negative reviews are being deleted.

After the incident I decided to do some more research on the company and found that other people have experienced the following situations (also without refunds): door locks being broken when you arrive, getting kicked out of the house by disgruntled ex-spouses, cancelling people’s stays hours before their reservation, hosts openly using drugs in common spaces, getting kicked out by HOA reps because the host doesn’t have rights to rent, not refunding people who were supposed to stay in Napa Valley during the devastating fires.

I don’t care what their policy states; they should operate by what’s right and what’s wrong. This company has no moral compass whatsoever. It sounds like just about anyone can qualify to rent their space through Airbnb and misrepresent it in their ad. I would highly advise against using this service.

My friends and I booked an Airbnb house In Fiumefreddo, Sicily. We chose this house because it could easily accommodate three couples, as there were at least three bedrooms with queen beds and three bathrooms. At booking, the owner confirmed that we would indeed have the entire house.

We arrived on October 3rd, 2017. The house had obviously been misrepresented by the owner. There were indeed three queen beds; however, one of those beds was in an alcove with curtains around it, curtains which could not have been hung more than one foot from the bed. That is not a bedroom.

There was an extremely narrow spiral staircase. I am a very small woman and could barely fit on the staircase, so we were certainly not going to be able to carry a suitcase up there. This meant whoever stayed on that floor would have to keep their suitcase on another floor and carry clothes up as needed. There were only two bathrooms and the older couple in the house informed us, through an interpreter, that we did not have the entire home, as they lived there.

We called the owner to inquire about the third bathroom and bedroom with queen bed. She told us her parents were living in the house on the first floor and had the other bedroom and bathroom, and said she would have her parents leave. We were not going to put two elderly people out of their home, as we would not be disrespectful to this man and woman. Their own daughter had misrepresented the situation.

We contacted Airbnb with the issues we faced: a house that was completely misrepresented by the owner. We requested a refund and were told we would get $500. This hardly compensates us for the money we paid and we feel cheated. If this is how Airbnb treats customers, it is very disappointing, and they have now lost six customers. We are all well traveled, and thought the Airbnb business model was one we would utilize for this trip. It was such a bad experience, and we have been poorly compensated. This was the first and last time we will use Airbnb. Our file needs to be reviewed again and we, who have been wronged by the homeowner, should be reimbursed if not for everything, then at least 80% of what we paid.