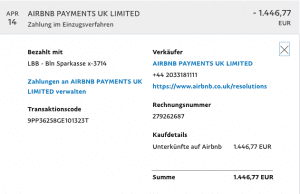 When booking an apartment through Airbnb, I chose “payment in installments” but was charged the full amount of about 1500 EUR by Airbnb from my PayPal account, immediately. I only realized this three weeks later when I was charged by Airbnb, again, from my paypal account. That time it was the first installment of 770 EUR which is to be followed by the second one in a few weeks.

I contacted Airbnb several times via telephone and messaging explaining that they had charged the full amount by mistake and asking for them to transfer the amount back to my PayPal account. So far, one week has passed and I have not been helped at all. On the contrary, one Airbnb person wrote to me that the amount of 1500 EUR was shown but not charged, which is a lie. All transfers are documented by PayPal.

Yesterday, I insisted in speaking to a person with more authorization. Finally, I was called by somebody who literally hung up on me in the middle of our conversation. This morning, I received a message telling me that if I have an issue with a suspicious credit card transaction I should first check on family members who might have used my card information. This was totally off topic as the charges for my booking were made from my PayPal account. I have the feeling that there are very limited means to get any further than the “customer support shell” which is doing anything but solving problems for Airbnb customers.