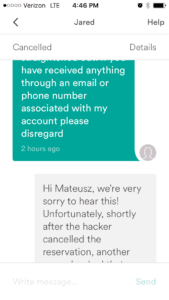 I started hosting a few weeks ago with Air BNB. Since then my account has been taken over by hackers, bank account details changed. I can’t login to my own account anymore. I have not received payment for my first guest who left already and I don’t know what to do about the next guest who is due Wednesday. I have called C Service every day for a week but they can’t help, only note my issues. I received one mail saying they would look into it and since then I keep getting emails that my bank account has changed, email etc again.. My account has now been closed and my listing removed from the internet. The communication from AirBNB has been atrocious, ie. leaving me hanging with no answers and not even the decency to reply to my 15 emails. I will be filing a police report and contacting my lawyer on Monday.