Recently I booked several Airbnb Experiences during a long stay in Merida, Mexico. Most of these trips were magical experiences with wonderful guides and friendly tourists. One thing I learned quickly was that the guides preferred to have more than one guest on a tour. In general, this makes sense because fixed costs like transportation can be spread over several people.

I personally try to book tours early so that guides have time to rally other guests to help with costs, and since Airbnb does not enforce a minimum guest count. However, on one particular tour I was the only tourist. The Experience took me deep into the jungle with a man I didn’t know, to rural places where we were completely alone.

I felt panic as we drover deeper and deeper into the jungle. I frantically shared my GPS location with friends for some modicum of security. Unfortunately, my cell phone had absolutely no reception at all. This tour guide seemed to prefer that I was a woman alone with him. He told me he habitually does tours for single women, as if it was proof that he is trustworthy.

During the tour, he would ask me to model for photos. It appeared that he was using the Airbnb Experiences as a dating service. I deeply regret going on this Airbnb Experience with this man. I felt like I was in danger during the entire eight-hour trip. I wish I had known I would be in this situation, and I wish I could have cancelled this trip.

For the safety of everyone involved, Airbnb should allow hosts and guests to enforce a minimum guest count on trips. Please offer us the opportunity to cancel these trips if there is only one guest. Ultimately, I am safe. However, I fear for the next woman who signs up for an Airbnb Experience and finds herself alone with a stranger where no one can help.

TL:DR I hope no one else has an Airbnb Experience like I did. 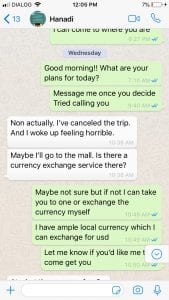 ***The opinions expressed in this piece do not necessarily reflect those of Airbnb Hell or its affiliates.***

I am a 45-year-old male. I run experiential tours on Airbnb, such as food tours, and also host a bar crawl. A female client went with me on Tuesday for a bar crawl. She said she had come here to broaden her experiences.

She said she was looking for sexual experiences as well. She wanted to come to my place and drink more alcohol like gin and rum, but not that night – perhaps the next day or the day after that. She said she had bought a bottle of Smirnoff vodka that she couldn’t take back to Dubai and needed to finish it off. I said we could drink that too.

That night after the bar crawl when I was getting her home, she said that she had a bad experience in her Airbnb host house, because she felt someone was watching her. Out of concern, I said, she could stay at my place for the night, until she found another place. She didn’t want to do that and forego what she had paid the host. Then I told her if she still felt that presence in her room to call me. She was happy at my concern and said okay.

The next day, she asked me to go with her on a private social excursion on Wednesday, which had nothing to do with Airbnb. She wanted me to take her to the bank to change money and to the mall, for a movie. She held hands with me. I didn’t pull away. She bought tickets for a movie and made plans for dinner. We walked in the mall for around two hours, holding hands, meeting my friends.

At all times she was happy and I also was enjoying holding hands with her. At the beginning I told her that if she was uncomfortable at any point we could stop holding hands; she said she was enjoying it. She planned for us to go to the movie at 8:45 and then for dinner. She also wanted to come to my place and drink alcohol. I said that was fine. Then she wanted me to do a food tour for her on Wednesday night or Thursday.

On Wednesday night she blew me off, and on Sunday had complained to Airbnb that I had acted inappropriately during the experience. I submitted the WhatsApp message thread showing that our social excursion happened on Wednesday and at her request. Regardless, within one hour of getting this message thread from me, they terminated my account and refused to give any consideration to the fact that:

I wish to sue Airbnb for whatever I can, as they have terminated my income, and also defamed my character by listening to this person who also has said she has mental and emotional issues, has been possessed by demons, and felt someone was watching her. All this was told to Airbnb but they took her side.