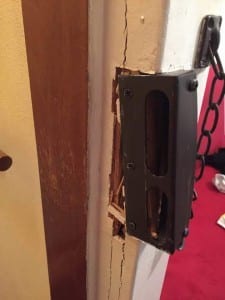 My wife, our young daughter, and I checked in to this apartment in Lisbon, Portugal mid-afternoon. When we arrived, the first thing we noticed was the dangerous staircase; it was nearly impossible to lift a large suitcase all the way to the third floor and I struggled to do so. Despite this property being listed as ‘child friendly’, the staircase was an extreme hazard and at this point I was already concerned about our three-year-old.

When we finally reached the staircase summit and the apartment, a young lady was waiting inside who spoke limited English but showed us the apartment and seemed helpful. The apartment seemed nice and in a great location. It also seemed like a low security risk for the following reasons: a very steep, straight staircase; two other apartments (one on each floor); no escape points for potential thieves; and tourists/cars around outside. Keep in mind it was also about 2:45-3:00 PM at this point (broad daylight). However, we learned that safety and security was a big problem.

Here’s what happened. Shortly after check-in, we went for a brief walk to look at the surrounding streets and picked up some food. Upon our return (approximately 45-60 minutes later), we opened the building door, walked upstairs and discovered the apartment door had been kicked open (visible footprints over the door) with a broken lock. All our possessions including passports were stolen (including my three-year-old daughter’s).

We immediately phoned the host who contacted the local police and Airbnb. To their credit, each party responded well: we received a refund from Airbnb and they offered to put us up for a night in a nearby hotel. We later discovered two critical pieces of information for which we should have been informed but were not:

The break-in was perfectly timed and this property is definitely being targeted by professional thieves and criminals. From the moment of our arrival, we were being watched (either by chance or someone knew of our arrival time) and the intruders had very easy access to the building; the front door was flimsy and provided little safety. This kind of burglary would easily have required some coordination and good timing: at least 2-3 people (one outside to keep watch) and the others to lift/struggle down the staircase quickly to avoid being caught. Remember, the street outside was busy and there were cars and tourists coming past.

There were also a few peculiarities. The thieves were extremely forceful with the apartment door (it was smashed/kicked open and broken with pieces of wood were everywhere), yet they were able to access the building door extremely easily (it was perfectly closed when we returned). It also struck me as a little odd that they also stole a key. Surely, their interests would be primarily in the valuables and getting out (not returning especially as the locks would be changed). I can only theorise at this point but regardless, it scares me to think what could have happened during the night or at other times. Intruders could easily walk up the stairs (with no neighbours around) and simply try their luck. We appreciate the host’s attempt to support us but this is a serious security and safety risk and I am concerned for future guests.

A couple of days ago during Hurricane Irma my boyfriend, his mom, and I rented a two bedroom apartment in the center of Richmond, Virginia to escape the storm. The listing looked extremely decent and the host had over 100 positive reviews. The flat was located on the first floor of a two-story building in the historic center of Richmond.

After arriving at the place around 10-11 PM we went to sleep and left the apartment early the next day to explore the city. We arrived back to the flat for the first time at 11:00 PM and that’s when we noticed we had been burgled. The host had two entrance doors at his apartment: one was a code door and the other door was a back door that could be opened only from the inside.

My boyfriend’s mom and I entered the house using the front door, while my boyfriend went to park the car and was waiting for us to open the back door for him. Upon reaching the back door, I discovered that it was unlocked. I asked my boyfriend if he left the door opened but he assured me that when we were leaving he checked that everything had been locked.

We started searching the rooms and noticed that my backpack with all my valuables was missing, that my boyfriend’s mom’s stuff was upside down and all of my boyfriend’s bags had been opened. Then we saw that the window of one of the rooms in the apartment was open, meaning that the burglars had entered the flat through the window and left using the back door.

We immediately called the police and wrote a report about it. It was interesting that the host had three TVs in the apartment as well as other electronics, but none of his things were missing, only my own valuables. Upon reaching out to the host, he of course said that he was not responsible for the robbery, even when he was negligent and did not provide any security for his apartment. Living on the ground floor, the host did not have any protection on his windows and not a single camera.

When speaking to me, the host said that the neighborhood where we were staying was very safe and nothing had ever happened to guests before. However, after the incident, he decided to put cameras about his house. I wish he would have done this before renting us his place. Airbnb has not taken any responsibility for what has happened to us and has completely ignored our requests. They did not even refund us the night that we had to spend in a hotel after the robbery because we were scared to stay at that apartment one more night. To sum it up, this stay with Airbnb cost us over a $3,000 in valuables and no one wanted to find a resolution to this incident.

In February, our Airbnb rental in Mexico was burglarized. The police came and a report was filed. All told, between two couples, we lost over $4500 of our possessions. The owner was very helpful; he filed a claim with his insurance company, which was denied about two weeks later because we were renters. Our personal homeowner’s policies covered all of our losses except our $500 deductibles for each couple, which might mean that the cost of our policies could go up.

I contacted Airbnb Customer Service over 12 days ago, to collect the two $500 deductibles from them. I was told to send all corresponding information to them, which I did. It has now been almost two weeks since Airbnb’s last contact with me. I have attempted to have other emails answered by their employees to no avail. I am now very angry at the rudeness of Airbnb. In the last two days, I have called the 855-424-7262 number four times. I was on hold for over 15 minutes each time with music playing, then when the music stopped (all four times), and I thought, yeah, someone is going to talk to me, I was disconnected. All four times.

I am mad and will not give up trying to reach Airbnb. They cover insurance for their homeowners; there should be insurance coverage for their renters as well. We are half of their business. My first communication with one of their representatives went very well. I thought this was a good company. However, in the ensuing two weeks, with no followups and reading about problems many other people have had trying to contact them, trying to reach someone by phone only to be disconnected four times after 15 minutes on hold, I am now convinced that Airbnb does not care. The CEOs have made their millions (billions) and they just don’t care anymore. I will be renting from HomeAway and VRBO in the future. Step up to the plate Brian Chesky, Nathan Blecharczyk, and Joe Gebbia. Someone at Airbnb should be reading the complaints and frustrations of your homeowners and renters on this website.