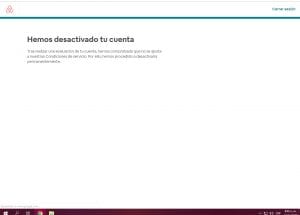 My Airbnb account was blocked for security reasons, nearly a month prior to my arrival; it was already confirmed, and half paid. About two weeks later, I tried to log in to check on the last details, and it did not let me completely sign in. It asked for my ID to be scanned and sent to a certain email, and that my account was going to put on hold until someone reviewed it.

I sent everything they asked me. I thought it was strange because I had had that account for some time by then and never had a problem with it. Airbnb ended up blocking it. When I tried to contact them it was impossible; they only answer by Facebook message, and the person answering me had no idea what was happening.

An email was sent explaining to me why my account didn’t respect their terms and conditions, which wasn’t true. I checked every single folder in my email from 2015, and the last email I received from them was October 3rd, 2018, a few weeks before my account was blocked. It was the confirmation email for my reservation.

When I asked for an explanation, the Airbnb representative on Facebook person said I should “check [my email] properly.” I did that several times. I even gave them my phone number and email again to contact me, but nothing happened. I never got an answer back regarding what had happened, but I was also told that they wouldn’t allow me to create any account – not now, nor in the future.

So Airbnb has totally banned me for no reason at all. I still have no answer and the person on Facebook just stopped answering me when I asked them to send me an email again to the address I provided them. A total disaster.

I’m now scared that my personal information must have been stolen or something like that. Because to me there’s no explanation whatsoever. They didn’t even give me a warning if they had information missing; they just blocked me.